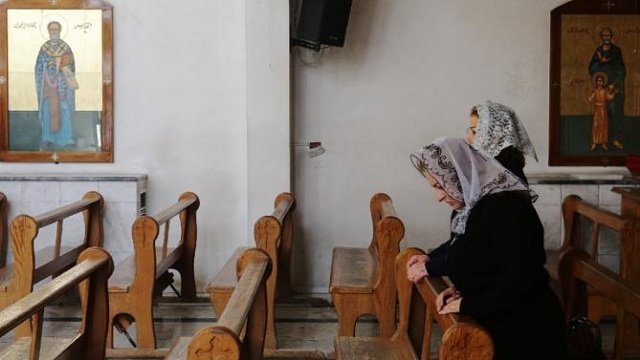 July 8, 2015 6:11 pm 0
Pope Appeals for Release of Christians Abducted in Syria
Assad Forces Targeting and Killing Christians
“Al Assad! Or we set the country on fire!”

The Belgian government said Wednesday that it has in recent months helped 244 Christians to escape from Syria and move to Belgium with refugee status, most of them families with children.

While this is good news for the Christians of Syria to find peace, it is certainly bad news for Syria. Without our Christian communities prospering, Syria would become a desolate place unable to rely on a Christian civilization that has achieved much.

The less diversity in Syria, the less our chances of building a better Syria. There is no good news in less diversity, but then who would blame Syria’s Christians for escaping fanaticism?

The humanitarian operation began in May to “save” some of the most vulnerable people in Aleppo, Syria’s second city where Islamist rebels are gaining ground, Foreign Minister Didier Reynders told a press conference in Brussels.

The Good news is that the minority Christians were selected by a citizen “action committee” run by a Belgian diplomat and a psychiatrist with a network of contacts in the country. They left Aleppo in small groups and in seven phases.

The bad news is that they reached the Lebanese border “on their own, crossing very dangerous areas of Syria”, then received support from the Belgian embassy in Beirut which arranged for refugee visas after a “very precise screening” by the intelligence services, Reynders said.

The minister said the operation was just “a drop” compared to the scale of Europe’s migration crisis, but he expressed hope that it could set an example to other countries.

Belgium wants to boost its image as a welcoming country for those fleeing war while a debate rages between EU members on the distribution of 40,000 asylum seekers who arrived in Italy and Greece after dangerous Mediterranean crossings.

The Christian Syrians are to receive training, particularly in language skills, and helped to find jobs after gaining their refugee status in Belgium.

“I can tell you that the last thing they want is to be dependent on social security,” said Francken, a member of the nationalist New Flemish Alliance (N-VA).

About 5,500 Syrian refugees of all faiths have been welcomed in Belgium since the war broke out in 2011, according to the Belgian government, which says “98 percent” of the Syrians who request refugee status get it.