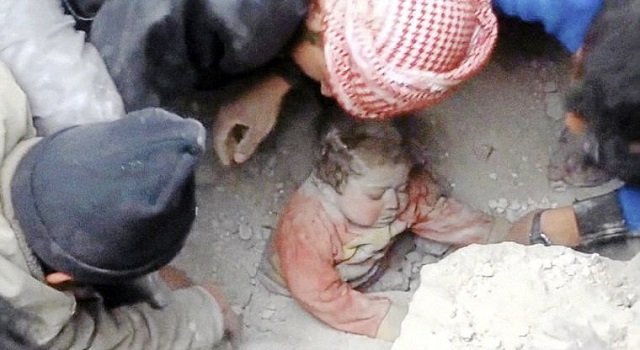 January 31, 2014 5:20 am 0
Assad Supporters Feeling the Pinch of Their War
Turkey Shot Down a Third Assad Warplane
Axis of Evil Assassinated the Great Rafik Hariri

Fourteen-month-old Ghina Khalil is recovering with her family in the northern Syrian city of Aleppo after being buried in rubble.

The stunning dramatic rescue was caught on video:

The dramatic rescue footage shows a group of men frantically digging in the dusty rubble of her home after an alleged airstrike on Jan. 22.

Amid cries of “God is greatest,” the toddler’s curly-haired head can be seen emerging from the dust, as the men scoop away handfuls of crumbled concrete with their bare hands. With her arms freed, the girl reaches up to wipe her eyes in a sign of life.

According to the activist who filmed the video, uploaded to the internet by the Nour Media Centre, the girl was completely buried for at least three minutes and her mother was killed in the attack. A video taken later showed Khalil in new clothes, with no visible injuries.

The Syrian government has been accused of using airstrikes and rocket attacks indiscriminately against residential areas.