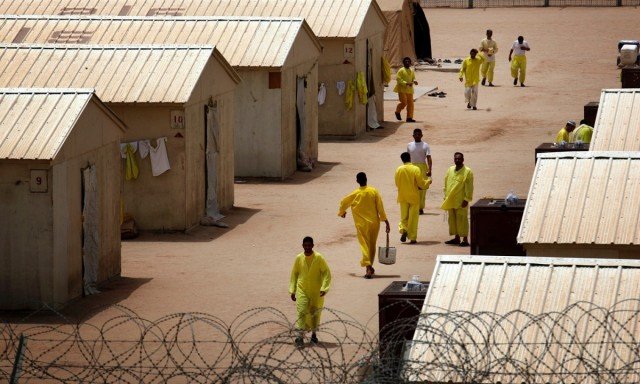 By Martin Chulov – The Guardian

…..Earlier incarnations of ISIS had dabbled with the Ba’athists, who lost everything when Saddam was ousted, under the same premise that “my enemy’s enemy is my friend”. But by early 2008, these meetings had become far more frequent – and many of them were taking place in Syria.

Syria’s links to the Sunni insurgency in Iraq had been regularly raised by US officials in Baghdad and by the Iraqi government. Both were convinced that the Syrian president, Bashar al-Assad, allowed jihadists to fly into Damascus airport, where military officials would escort them to the border with Iraq. “All the foreigners I knew got into Iraq that way,” Abu Ahmed-a senior official within Islamic State (ISIS)- told me. “It was no secret.”

In our conversations, Abu Ahmed emphasised the Syrian connection to Iraq’s insurgency. “The mujahideen all came through Syria,” he said. “I worked with many of them. They had flown to Damascus. A very small number had made it from Turkey, or Iran. But most came to Iraq with the help of the Syrians.”

In 2008, when the US began to negotiate the transition of its powers to Iraq’s feeble security institutions – and therefore pave the way to its own exit – the Americans increasingly turned to only a few trusted figures in the Iraqi government. One of them was Major General Hussein Ali Kamal, the director of intelligence in the country’s Interior Ministry. A secular Kurd who had the trust of the Shia establishment, one of Kamal’s many duties was to secure Baghdad against terror attacks.

Like the Americans, General Kamal was convinced that Syria was destabilizing Iraq, an assessment based on the interrogations of jihadists who had been captured by his troops. Throughout 2009, in a series of interviews, Kamal laid out his evidence, using maps that plotted the routes used by jihadists to cross the border into western Iraq, and confessions that linked their journeys to specific mid-ranking officers in Syrian military intelligence.

As ISIS activity ebbed in Iraq, Kamal had become increasingly obsessed with two meetings that had taken place in Syria early in 2009, which brought together Iraqi jihadists, Syrian officials and Ba’athists from both countries. (Kamal, who was diagnosed with a rare cancer in 2012, died earlier this year, and authorised me to publish details of our conversations. “Just tell the truth,” he said during our last interview in June 2014.)

When I first met him in 2009, he was poring over transcripts of recordings that had been made at two secret meetings in Zabadani, near Damascus, in the spring of that year. The attendees included senior Iraqi Ba’athists who had taken refuge in Damascus since their patron Saddam was ousted, Syrian military intelligence officers, and senior figures in what was then known as al-Qaida in Iraq. The Syrians had developed links to the jihadists since the earliest days of the anti-US insurgency and had used them to unsettle the Americans and their plans for Iraq.

“By early in 2004/05, Islamic elements, jihadists and disenfranchised Ba’athists were starting to get together,” said Ali Khedery, the former adviser to American ambassadors and senior commanders in Bagdhad. “They were naturally disciplined, well organised people who knew the lay of the land. And over time, some folks who were Ba’athists became more and more Islamist and the insurgency raged. By 2007, General [David] Petraeus was saying there was crystal clear intelligence of cooperation between Syrian military intelligence and the jihadists.”

“We had a source in the room wearing a wire,” at the meeting in Zabadani, General Kamal told me at the time. “He is the most sensitive source we have ever had. As far as we know, this is the first time there has been a strategic level meeting between all of these groups. It marks a new point in history.”

The Ba’athists present led the meeting. Their aim, according to General Kamal’s source, was to launch a series of spectacular attacks in Baghdad and thereby undermine the Shia-majority government, which had for the first time begun to assert some order in post-civil war Iraq. Until then, al-Qaida in Iraq and the Ba’athists had been fierce ideological enemies, but the rising power of the Shias brought them together to plan a major strike on the capital.

By July 2009, the Interior Ministry had increased security at all checkpoints across the Tigris river into Baghdad, making a commute at any time of day even more insufferable than normal. And then General Kamal received a message from his source in Syria. The extra security at the bridges had been spotted by the attack plotters, he said. New targets were being chosen, but he didn’t know what they were, or when they would be hit. For the next two weeks, Kamal worked well into the evening in his fortified office in the southern suburb of Arasat, before being sped by armoured convoy across the July 14 Bridge – which had been a target only days earlier – to his home inside the Green Zone.

For the rest of the month, General Kamal spent several hours each scorching night sweating it out on a treadmill, hoping that the exercise would clear his head and get him ahead of the attackers. “I may be losing weight, but I’m not finding the terrorists,” he told me during our last conversation before the attackers finally struck. “I know they’re planning something big.”

On the morning of 19 August, 2009 the first of three flat-bed trucks carrying three large 1000-litre water tanks, each filled with explosives, detonated on an overpass outside the Finance Ministry in south-eastern Baghdad. The blast sent a rumble across the Emerald City, raising desert soil that caked homes brown, and sending thousands of pigeons scattering through the sky. Three minutes later, a second enormous bomb blew up outside the Foreign Ministry on the northern edge of the Green Zone. Shortly after that, a third blast hit a police convoy near the Finance Ministry. More than 101 people were killed and nearly 600 wounded; it was one of the deadliest attacks in the six-year-old Iraqi insurgency.

“I failed,” Kamal told me that day. “We all failed.” Within hours, he was summoned to meet Maliki and his security chiefs. The prime minister was livid. “He told me to present what I had to the Syrians,” Kamal later said. “We arranged with Turkey to act as a mediator and I flew to Ankara to meet with them. I took this file” – he tapped a thick white folder on his desk – “and they could not argue with what we showed them. The case was completely solid and the Syrians knew it. Ali Mamlouk [the head of Syrian general security] was there. All he did was look at me smiling and say ‘I will not recognise any official from a country that is under US occupation’. It was a waste of time.” Iraq recalled its ambassador to Damascus, and Syria ordered its envoy to Baghdad home in retaliation.

“When [the civil war in] Syria became serious,” Abu Ahmed, the ISIS official active in the group’s operations in both Syria and Iraq, said to me, “it wasn’t difficult to transfer all that expertise to a different battle zone. The Iraqis are the most important people on the military and Shura councils in ISIS now, and that is because of all of those years preparing for such an event.”