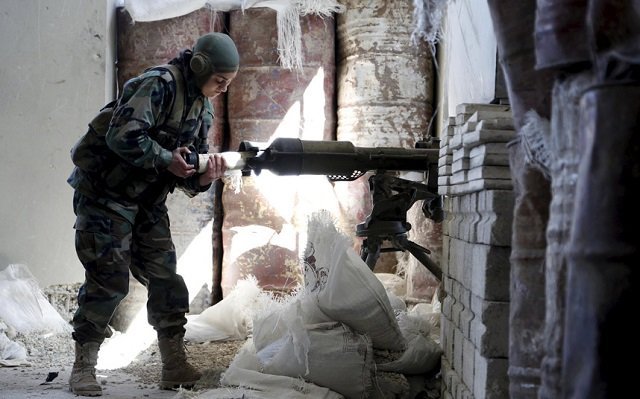 One of the doctors working in al-Assad University Hospital in Damascus revealed to Souria.net, a pro-rebel website, that 600 female pro-Assad fighters have undergone surgery at the hospital during the past two years for injuries caused by gunshot wounds or shrapnel shells. In some cases, hysterectomy and abortion were performed.

The doctor, who asked for anonymity for security reasons, said the al-Assad University Hospital is the one most used by regime forces injured in battles around Damascus because of the heavy presence of military intelligence and military police. Supervisors of the operations department are specialized doctors many with military ranks who volunteered in the regime’s army before and during the Syrian Revolution.

The doctor added that operating on female fighters at the hospital has become a routine affair considering the number of operations over the last two years. The female fighters often arrive still wearing their military uniforms and holding their weapons. Sometimes, the doctor added, they are accompanied by senior female officers from the intelligence or military units.

At the rate of 600 female pro-Assad fighters operated on the last two years. the hospital received an average of one injured female fighter a day.

Increasingly, the Assad regime has come to rely on female fighters to fill the ranks of an army that has been depleted. Many of the female fighters have witnessed heavy fighting on such hot fronts as Jobar outside Damascus. The Islamists have targeted Assad’s female fighters, who gave themselves the nickname “Assad’ Lionesses”, back in April of this year, which resulted in many of them dying. Nonetheless, 600 female pro-Assad fighters have undergone surgery is surprising.

Furthermore, pictures surfaced on the Internet of Assad’s female fighters engaged in battles in Daraya, also outside Damascus. The Assad regime lost big numbers of troops in Daraya ever since its siege. Russia Today even reported on these female fighters videotaping them in the thick of battle.

It is notable to mention that in addition to the attrition experienced in the Assad armed forces, many of the male Alawites supposed to join to fight have, instead, dodged the draft by escaping to Europe leaving behind the Alawite females to fight on their behalf.