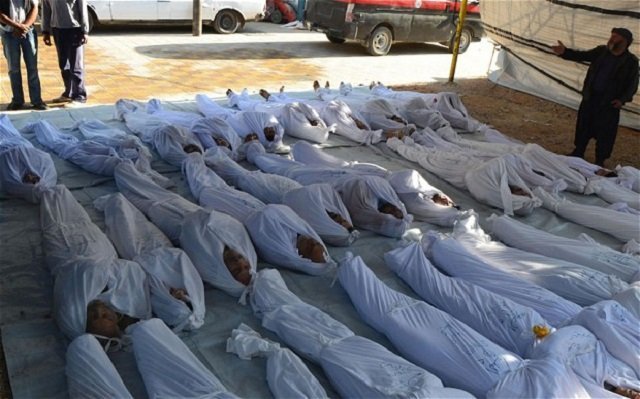 September 1, 2013 10:01 am 0
How Syria’s Dictator Slaughters His People
Hariri wants operation Decisive Storm moved to Syria
The Carnage of Barrel Bombs in Syria

The Obama administration asserted Sunday for the first time that the Syrian government used the nerve gas sarin to kill more than 1,400 people in the world’s gravest chemical weapons attack in 25 years as the White House intensified pressure on a skeptical Congress to authorize punitive military strikes against Damascus.

In an interview blitz on five Sunday television news shows, Kerry said the fresh forensic evidence strengthened an already compelling case for taking military action against the government of Syrian Bashar al-Assad, and he predicted that Congress would vote to give President Obama that authority.

“I can’t contemplate that the Congress would turn its back on all of that responsibility and the fact that we would have, in fact, granted impunity to a ruthless dictator to continue to gas his people,” Kerry said on “Fox News Sunday.” “Those are the stakes.”

But many lawmakers, including some who had previously pushed for a harder line against Assad, said the White House would have a tough time drumming up support for intervention in Syria’s seemingly intractable civil war.

It is a debate that most in Congress did not expect. Administration officials had given every sign that Obama would order an attack on Syria over the Labor Day weekend. The Navy had moved destroyers armed with cruise missiles close to the Syrian coast, and Pentagon officials said they were ready to strike.

On Saturday, however, Obama stunned much of the world by announcing that he had decided to hold off for the moment and that he would first seek formal backing from Congress. On Sunday, he dispatched a stream of national security officials to Capitol Hill for classified briefings to lawmakers who interrupted their summer recess to rush back to Washington.

Senate Judiciary Committee Chairman Patrick J. Leahy (D-Vt.) told reporters that Obama’s proposed resolution seeking authorization to use military force would not pass Congress as written because it was too broad. “It will be amended, ” Leahy said.

Rep. Bill Pascrell Jr. (D-N.J.) said he sensed that colleagues in both parties appreciated the seriousness of the decision but that many were genuinely undecided. “I’m glad I read the documents; it was worth the trip,” he said. “I haven’t really made up my mind. I’m not trying to be a wise guy — I just haven’t.”

Obama warned Assad a year ago not to use chemical weapons against his own people, saying such a move would cross a “red line” that could force the United States to intervene militarily. On Aug. 21, a torrent of grisly videos surfaced on the Internet, depicting mass casualties from a nighttime attack outside Damascus that rebel groups said involved poison gas.

In an unclassified intelligence dossier made public Friday, U.S. officials said they believe that the Syrian government used a “nerve agent” in the attack. But the intelligence report did not specify the kind of nerve gas and appeared to lack forensic evidence that would support a definitive conclusion.

On Sunday, Kerry said U.S. officials had received fresh lab results showing traces of sarin in hair and blood samples collected from the scene. He did not give further details or elaborate on the source of the material, other than to say that it had not come from a team of United Nations inspectors that left Syria on Saturday.

The U.N. team of chemical weapons experts had spent four days near the site of the alleged attack and brought an extensive collection of forensic samples and other evidence to The Hague for testing in European laboratories.

The results of those tests, depending on how quickly the tests are conducted, could play an influential role as Congress debates whether to endorse military action against Syria. If the U.N. tests confirm the use of sarin gas, they will lend independent credibility to the Obama administration’s arguments. If the U.N. tests are inconclusive or offer conflicting results, they may badly undercut the White House.

U.N. officials had said previously that it could take as long as two weeks for the experts to present their findings. On Saturday, a U.N. spokesman said, “Whatever can be done to speed up the process is being done, but we are not giving a timeline.”

Syria is thought to have multiple nerve agents and other poison gases in its chemical stockpile. Assad’s government has denied carrying out gas attacks, blaming rebel forces instead.

Long-standing global treaties have banned the use of chemical weapons. The last major chemical weapons attack occurred in 1988, in Halabja, Iraq, a Kurdish city that was gassed on the orders of ruler Saddam Hussein.

Kerry said the purpose of a limited military strike would be to deter Syria from using chemical munitions again, as well as to send a message to Iran and other countries in the region that Obama would back up his warnings about the development or use of weapons of mass destruction. Removing Assad from power or affecting the tide of Syria’s civil war was not the goal, administration officials said.

Kerry also played down the timing of any military action, saying it would not make any difference if it occurred a week or two later than originally planned.

Syrian opposition groups have reported that Assad’s forces have been moving troops and military equipment into civilian areas, hoping to shield their resources from a U.S. attack.

Current and former U.S. military officials said, however, that any missile strikes would probably be aimed at Syrian army installations, bridges and other fixed targets rather than troops or mobile weapons systems. They said the Pentagon would almost certainly avoid attacks on chemical weapons depots because of the risk that poison gases would leak and disperse into the air.

“Most of the targets associated with this limited strike are fixed. They’re buildings, they’re facilities, they’re areas,” James E. Cartwright, a retired Marine general and former vice chairman of the Joint Chiefs of Staff, told ABC’s “This Week.” “They’re not going to move.”

Congress is scheduled to return from recess Sept. 9, but Senate leaders said they would revise their agenda and hold a hearing on Syria on Tuesday.

Both parties appeared to be divided, and no one was predicting an easy victory for the president.

“I think at the end of the day, Congress will rise to the occasion,” Rep. Mike Rogers (R-Mich.), chairman of the House Permanent Select Committee on Intelligence, said on CNN. “This is a national security issue. This isn’t about Barack Obama versus the Congress. This isn’t about Republicans versus Democrats.” Evidence of a chemical attack “is convincing and getting better,” he added.

Other senior Republicans said they doubted that Congress would sign off on a military strike.

“I don’t think they will,” Sen. James M. Inhofe (Okla.), the ranking Republican on the Armed Services Committee, said on “Fox News Sunday.” He said likely outcomes in Syria are much more complicated than the one the Obama administration has drawn.

“It may sound real easy when people like Secretary Kerry say this is going to be quick and we’re going to go in and we’re going to send a few cruise missiles and wash our hands and go home,” said Inhofe, who opposes military action in Syria. “It doesn’t work that way. This could be a war in the Middle East. It’s serious.”

Loveday Morris in Beirut and Paul Kane and Sean Sullivan in Washington contributed to this report.