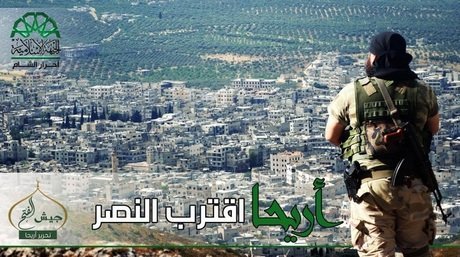 A rebel coalition led by al-Qaida’s Syrian affiliate edged into the last remaining government-held city in the northwest province of Idlib on Thursday, activists said.

The lightning offensive saw the Army of Conquest, or Jaish al-Fatah in Arabic, enter outer districts of Ariha within a matter of hours, activists on the ground told AFP. The regime is beginning to lose badly.

“There was heavy shelling and rocket fire, then they stormed the city; they have entered the city and are engaged in fierce clashes on its peripheries”

Ariha, which was home to 40,000 people before the conflict began, is the last remaining government-held city in Idlib province which borders Turkey.

The coalition, which includes al-Qaida branch al-Nusra Front, has won a series of victories in Idlib, including the provincial capital on March 28 and the key town of Jisr al-Shughur on April 25.

Most recently, the rebels seized the massive al-Mastumah military base and overran a hospital complex where regime soldiers were trapped.

Many government forces retreated from these areas to Ariha, which the activists said was heavily defended by fighters from Iran and Lebanese Shiite movement Hezbollah.

The Army of Conquest vowed to consolidate its control of Idlib province, where the regime still holds Ariha, the Abu Duhur military airport and a sprinkling of minority villages and military posts.

Considering how fast the Assad forces are losing, even with heavy support from Iran and Hezbollah, it is a question of time before the regime hunkers down in Damascus to protect the Assad rule.

This will leave the minority-held area of Sahel vulnerable to attacks by Jaish al-Fateh.