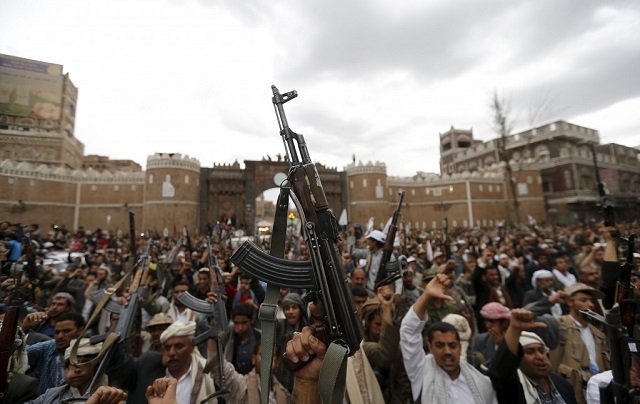 The tide of Yemen’s messy war has unexpectedly turned, handing a morale boost and possibly decisive military momentum to Gulf Arab-backed forces bent on ending the ascendancy of the Houthis, a powerful militia they see as a puppet of Iran.

in a matter of months, the Yemen’s war shifts in favor of Riyadh.

The loss of the strategic southern port of Aden in the space of just a few days is a spectacular reversal for the Houthis, a once obscure rural group that won national importance last year before gaining the upper hand in a four-month-old civil war.

At stake in what happens next is the stability of a country that is a cockpit of rivalry between regional powers Saudi Arabia and Iran, sits on leading international shipping routes and provides a haven for al Qaeda’s boldest international wing.

Abdulkhaleq Abdulla, a political scientist in the United Arab Emirates (UAE), said Gulf Arab states saw Yemen as a proving ground for their resolve to confront Tehran, and last week’s capture of Aden proved they could hold their own. {ID:nL5N0ZX0PN]

“If America and Iran are now on good terms … this is a show of things to come – We are ready to defend our own turf,” he said, referring to an Iranian nuclear accord that could open the way to a rapprochement between Washigton and Tehran.

“In this zero-sum game, the balance of power in the region has swung to the Gulf states’ advantage, after this net loss for Iran in Yemen.”

The capture of Aden by thousands of anti-Houthi forces was made possible in part by a military effort prepared for many weeks by wealthy Gulf Arab states which trained and supplied Yemeni recruits especially for the task.

The Gulf Arabs, including Saudi Arabia and the United Arab Emirates (UAE), have deployed some of their own special forces, as well as backing up the effort with hundreds of air strikes.

But the advance may also have benefited from efforts to weaken a key pillar of Houthi power, namely an alliance with former president Ali Abdullah Saleh, who has the loyalty of army units that are probably the country’s toughest military force.

The tie-up is rooted in tactics rather than ideological sympathy — Saleh and the Houthis were once sworn enemies but made common cause last year against shared enemies.

The move, typical of Yemen’s constantly shifting political landscape, gave the Houthis a decisive edge on the battlefield.

Diplomats and Yemeni politicians say representatives of Saleh, whose army loyalists laid siege to Aden alongside the Houthis back in March and April, are negotiating with diplomats from the UAE.

If successful, the gambit may deliver a critical impetus to U.S.-allied Gulf States, who intervened militarily in March to restore to power President Abd-Rabbu Mansour Hadi, a Saudi and U.S. ally, and beat back Iran’s influence in the region.

“Gulf countries have been working on the military training and arms supplies that drove the events in Aden, but it’s simultaneously working through the backdoor to split Saleh from the Houthis,” Farea al-Muslimi, a Yemeni researcher with the Carnegie Middle East Center said.

Adel Shuja, a leader of the party Saleh leads, told Reuters that negotiations between the ex-president’s representatives and the United States, Britain and the UAE “to find a peaceful solution to the crisis…have made significant progress so far”.

A Western diplomat contacted by Reuters played down the significance of the contacts, saying that they came as part of regular discussions with Yemeni officials. Saleh’s party denied any meetings in an official statement, and a party official tweeted that Saleh was opposed to quitting the country.

A politician from Yemen’s government said the talks focused on the departure from Yemen of Saleh, an arch survivor who balanced nimbly between rival armed and tribal groups during his three decades in office.

Despite being forced to step down in 2012 under a Gulf-brokered transition plan following mass protests against his decades of rule, Saleh has remained a powerful political player operating behind the scenes, enjoying immunity under the deal.

Saleh’s fortunes are now again in question. A diplomat said Saleh was “gambling, as ever, but now less for power than for survival”.

Saleh backed the Houthis when they seized the capital Sanaa in September and pressed south toward Aden alongside Saleh forces, triggering the Arab intervention on March 26.

“They’re speaking to him to extract him from the country, because they realize that while he cannot again rule the country, he can still destroy it,” a Yemeni politician told Reuters.