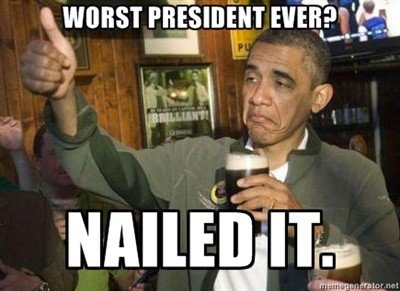 Worst US President ever

July 31, 2014 3:50 am 0
If Allegedly Smart Barack Obama Was So Smart, Why Then …
Obama biggest terror recruiting machine
Tit-less old cow and its excessive burden

When pendulums swing, they tend to obey the laws of gravity by exaggerating the next counter stroke. In the aftermath of the US unfortunate economic sub-prime meltdown, which, incidentally, the Cranston-Gonzalez National Affordable Housing Act had a direct impact on its cause, Americans swung hard left to elect an inexperienced Senator whose politics were unknown, untested, and to those of us who have seen this movie before play out in Middle East dictatorships, unwelcomed.

The fact Barack Obama was black was just icing on the cake to many Americans eager to show respect and admiration for Martin Luther King by shelving our shameful past permanently.

After almost six years in office, Americans are getting tired of Barack Obama, which, if one analyzes other US Presidents? second-terms is not very unusual. Getting tired of our Commander-in-Chief just before the second mid-term elections seem to have become a traditional six-year itch we all experience. However, in the case of Barack Obama, the itch has turned into anger and fear.

The anger is the result of his domestic policies to grow the Government to control many more aspects of our lives. The US Government has become, under Barack Obama, a regulated bully looking for victims while ignoring the real threats affecting our lives such as border control, runaway IRS muscling its way into our personal lives, and an apathetic Department of Justice carving deeper into the lack of accountability trail other Presidents may emulate. Add Obama?s lies about his signature failure in Obamacare and we have anger simmering deep and wide. The American people feel Barack Obama has deceived them and they will show their anger come the November mid-term elections.

We also are becoming angry of what might happen to this country when the American people observe a new form of arrogant apathy at every club swing the President takes on a Golf course or a handshake he offers on his fund raising trail. If money speaks loudly in elections, voices speak louder than money, and Obama is trying, through a marathon of fundraising events, to cushion as much as he can his failures as a President we all see, on the horizon, in the results of the next elections.

Fear is also gripping us when we watch terror and extremism flourish in many regions of the world because Obama is ignoring it or negotiating with it. Further, fear manifests itself when we see our loyal allies Israel and Saudi Arabia suffer the consequences of Obama?s deliberate harmful politics. Obama?s White House looks like the Titanic on its maiden journey and the iceberg of terror appearing in the horizon to harm this nation after Obama leaves office. Of course, Obama will blame the future sitting US President the way he blamed the past US President during his disastrous eight-year in office.

Just on Syria, Michael Gerson wrote an Op-ed I recommend everyone to read. It removes any doubt as to the damage Obama?s Syrian policy caused for our national security interests. Gerson, at one point, writes the following:

?At every stage, Mr. Obama defended his [Syrian] policy with false choices and flanking attacks on straw men: Any critics of his minimalism wanted Marines in Damascus. And when he eventually adopted the policy recommended by many of his critics ? aid to the responsible rebels ? it was very late. Mr. Obama has consistently complained about American powerlessness in Syria and, through risk aversion and delay, has ensured that powerlessness.?

The question many should be asking, ?Is Obama the worst US President ever?? I believe many historians that are far more knowledgeable will be able to answer that question considering they will have eight years in which they can make or break that case. For us the baby boomers with many US Presidents to compare to, however, we have answered this question satisfactorily, and the more time goes by, the worst it gets because Obama is not learning from his mistakes. His hesitancy to assume the responsibilities of the Office except to harass and be combative with those he disagrees with is something all Americans must fear and be angry with.

It took almost 35 years to forget the cataclysmic Presidency of Jimmy Carter. It may take twice as long to elect another President like Barack Obama, which is not so comforting to those of us struggling with his lack of leadership, lack of experience, lack of learning, and his voracious appetite to ignore humility in favor of arrogance.

Honesty, I cannot wait for the mid-term elections, and I certainly cannot wait for January 19, 2017 when we bid Barack Obama a cold farewell hoping never to hear his name again. I am happy to rent any ?B? movies he makes if he abandons politics in favor of a new career in Hollywood. Shall we start a petition to encourage him to hush and blush?

Keep-on dreaming you say? Who can keep their dreaming under control when it comes to Barack Obama?