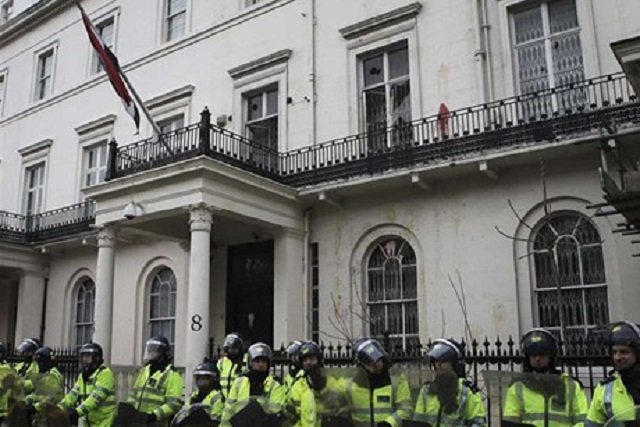 Wonder What Syrian Embassies Do?

June 30, 2011 9:42 am 0
What is Wrong with Iraq and PM al-Maliki?
When we elect an ignorant president
Michel Suleiman: Lebanon’s President or Syria’s Ambassador?

Do you ever wonder what Syrian Embassies legitimately do?

There was a story few days ago on BBC (“Syria ambassador in London summoned to Foreign Office“) sparked by a Syrian diplomat who found it quite legal to call Syrian individuals living in the UK to intimidate them and threaten them.

Wonder what Syrian Embassies do? Wonder no more.

One can argue that this was a rogue incident or one implemented through an individual zealot, but the reality is that the Syrian Embassies around the world, with their hand-picked Ambassadors by Assad himself, represent not the Syrian people but Assad and his family. Their jobs is to protect the regime by lobbying western capitals and if that means they need to break protocol and the laws of the countries hosting them, so be it.

The Syrian Embassy in Washington DC, manned by no lesser of an evil person named Imad Mustapha (The stories we wish we could write will raise the hair on your necks), is behind every visit to Syria by any US official. If Dennis Kucinich saw no wrong in sitting with a butcher of children and women, it’s because of Imad Mustapha, Assad’s childhood friend and a Blogger in his own right.

The same savages ruling Syria today also rule the Syrian Embassies and no staffer, no matter how powerful, can open his/her mouth in their presence. Our Embassies have become a microcosm of The Damascus regime intent on any type of action to survive. !

All of the Syrian Ambassadors in the US and Europe must be sent home packing. They are an extension of a barbaric regime and no law abiding country can afford to sustain a relationship with their ilks, roaming with gun blazing in support of tanks killing unarmed civilians.

Wonder What Syrian Embassies Do?