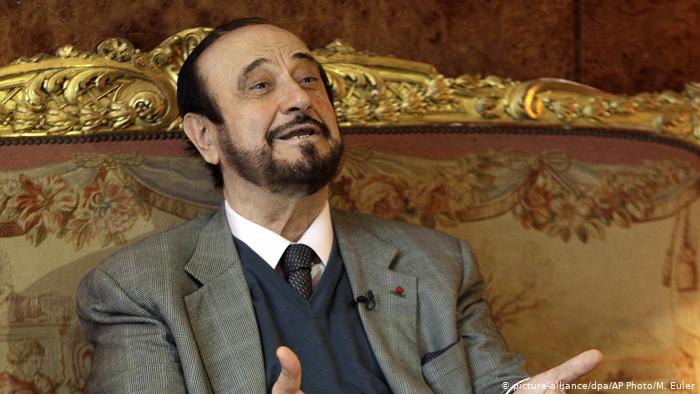 November 23, 2019 5:08 am 0
Assad Massacres Civilians in Abu Duhur
Assad Removes the Prime Minister When He Should Remove Himself
Syria’s Dilemma: One Terror Out, Another Takes Its Place

A Spanish judge is recommending that Syrian ex-Vice President Rifaat Assad, the exiled uncle of Baschar Assad, and 13 others be put on trial on charges of criminal organization and money laundering. Will Spanish prosecutors haul Rifaat Assad to court just as their French counterparts are about to do?

Judge José de la Mata declared that Rifaat Assad and the others, including eight sons, have laundered money taken out of Syria in several European countries since the 1980s.

The court alleges they laundered around 600 million euros ($664 million) in Spain through real estate purchases. The 14 weren’t immediately available for comment.

The judge in 2017 ordered the seizure of more than 500 properties belonging to Assad and his relatives.

Rifaat attempted, during the civil war, to contact the Russians to present himself as an alternative to his nephew

De la Mato has asked prosecutors to decide if Spain should proceed with the case. The prosecutors have 10 days to decide on whether to haul Rifaat Assad into Spanish courts.

Rifaat Assad, thought to live in France, fled Syria in 1984. Like Spain, the french courts will be trying Assad beginning December 9 for the same charges of laundering money pilfered from Syrian state coffers. He used the money to acquire millions of Euros worth of French properties. The 82-year-old butcher has always claimed that the Royal Saudi family and Moammar Qaddafi have gifted him the money.

In the Syrian circles and abroad, Rifaat Assad has a nickname: The Butcher of Hama.

He earned it when in 1982, to kill few hundred Islamists, Assad turned his artillery and helicopter gunships against the whole city. In two weeks of constant bombardment, Hama laid in ruins with up to 30,000 civilians dead. This was the first time the world witnessed the barbaric violence of the Assad family.

It continues today with his nephew, the butcher of Damascus, running the show of horrors.

Is Baschar al-Assad behind these prosecutorial moves? Rifaat Assad, after all, attempted to dislodge his father Hafez from power in a failed coup that saw him fleeing Syria for good in 1984.

There is a good probability, since the European prosecutors need evidence only the Syrian government can provide as to the origin of his funds, that his nephew may be supplying the evidence to bury his uncle.

Rifaat attempted, during the civil war, to contact the Russians to present himself as an alternative to his nephew. For Baschar al-Assad, it may be payback time.