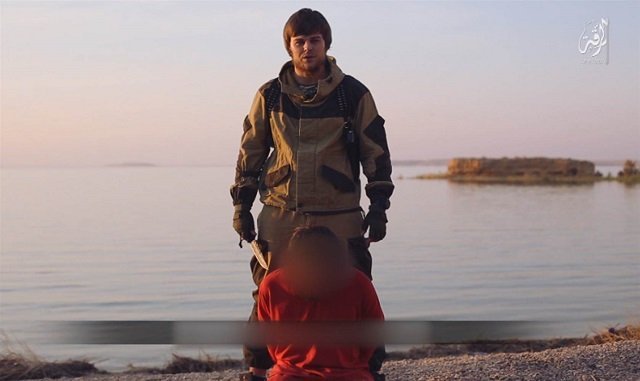 Will Putin Acclimate His Priorities in Syria Now?

After the story below, will Putin acclimate his priorities in Syria now by concentrating on striking ISIS instead of Assad’s moderate opposition.

A video released online by Islamic State on Wednesday purportedly showed the beheading of a man the group said was a Russian spy its fighters had captured and who had been in Syria and Iraq since last year, the SITE monitoring group reported.

The video shows the man sitting in an orange jumpsuit and giving details of his apparent recruitment by Russian intelligence services.

Then, in a different outdoor location, an Islamic State fighter, who in Russian threatens Russia and President Vladimir Putin with attacks, appears to cut the man’s throat and cut his head off.

It appeared to be the first claim by the group that it was holding the Russian prisoner. Moscow has not reported that any of its citizens are held by Islamic State, which is not surprising because Russia has yet to announce officially the death of one of its pilots shot down by Turkey two weeks ago.

Finally, will Putin acclimate his priorities in Syria by concentrating 100% of his air strikes on ISIS?

Russia’s security service, the FSB, declined to comment. There was no immediate comment from Russia’s foreign ministry.

Islamic State has beheaded an unknown number of hostages in numerous videos, both Western prisoners and people from the Middle East, including soldiers fighting against it and Muslims who reject its hardline version of Islam.

Psychopath Baschar al-Assad forged ISIS in Syria when he released hardcore Islamists from his jails with the purpose of showing the West who his alternative were should he be deposed and removed from power. Obama ignored him even though he had the intelligence.

This is the reason why Putin has avoided destroying ISIS. It still serves a purpose as long as the West demands Assad must go.

Will Putin Acclimate His Priorities in Syria Now?

Any Doubt Putin Has Trumped Obama in Syria?
Putin Is Destroying My Dream of Returning to a Free Syria
Putin and Assad Carry Out Daily Cluster Bomb Attacks
Putin Terror 436