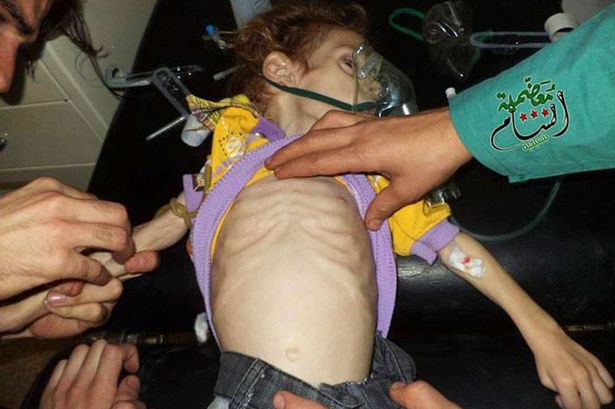 There is something very wrong in a world community that wrapped a CW rope around Assad’s neck but left his hands free to mass murder his people; this time through starvation.

If we, moderate Syrian-Americans, are acting with such compassion using our pens, how do you think those less moderate Arabs, with guns in their hands, will act if they feel the same compassion? The world inaction to curb permanently the Assad violence has long-term terror consequences for all concerned. He is the reason why Sunni terror is on the rise.

President Obama and Secretary Kerry have argued, on several occasions, that international aid to the Syrian people is unconditional and a responsibility they take seriously. Will they take it seriously enough to airlift food supplies to Moadamia, north of Damascus to stop Assad from starving thousands of women and children?

Does the President have the vision of President Harry Truman, or does his Secretary Kerry have the fortitude of Secretary Marshall to save the Syrian people from the clutches of the mad man Assad by airlifting to Syria the way Truman and Marshall airlifted to save starving Berliners?

Deep down, we know Mr. Obama may never again utter the word “Syria” in public and we doubt Secretary Kerry to have the courage for a “Kerry Plan” to save Syrians from starvation to become his most important legacy.

It is during these moments of crisis that politicians rise to become true leaders or fall because they cannot withstand the pressure of their responsibilities. They let others write their history of defeatism and inaction.

For now, Israel may be Syria’s children only hope. Will Israel airlift food to starving Syrian children? Here are some arguments to back this bold move.

Although the Israeli official policy on Syria is to avoid interfering in the on-going civil war, humanitarian aid to a neighboring country whose babies are suffering from starvation is hardly interference. The political capital Israel earned by treating some 127 Syrian civilians wounded in battles may simply vanish if Israel chooses to ignore the plight of Syria’s children.

Just imagine what will happen to the negative perception Arabs have been fed about Israel when PM Netanyahu takes advantage of the IDF air superiority to deliver food to Syria’s children while Assad, Khamenei, and Nasrallah are all conspiring to starve them to death?

Who will ever dare send another Gaza Flotilla when those who attempted to ship supplies to the Palestinians all sat on the sidelines unwilling to airlift to Syria’s suffering children?

Who will ever stand with Hamas when it fires missiles at the only country who risked much to save Syria’s starving children during a Eid when the world celebrate Abraham’s own willingness to sacrifice his son?

Consider the repercussions around the world when everyone is sitting Syria out and Israel shows her detractors at the UN that Israel, through shifting public opinions, is able to challenge their contemptuous behavior.

Imagine the faces of those detractors when they meet next in New York to discuss some trivial violation just to poke Israel in the eye and all Israel has to do, during such meetings, is show images of their airlift to Syria to shut them up for good.

The opportunity has presented itself for Israel airlift to starving Syrian children and we hope the Israeli leadership will not let it go to waste, especially because we are at the tail end of Eid al-Adha, which is supposed to be a food feast Assad turned intentionally into a starving feast.

In the meantime, removing the CW’s from Assad’s hands does nothing to cage this monster from committing mass murder as he sees fit.

Contrary to popular belief that Assad is a front line defense against the rise of fundamentalism, Assad is the reason why Islamist extremists exist. Today, the Kurds and the FSA are the ones protecting Syria from their curse and Assad only lives to exact revenge on the innocent and the helpless who dared to rise against him.

The Assads are the curse of humanity, a Darwin one-off form of violence who escaped the Natural Selection process the world believed it buried during the Dark Ages.