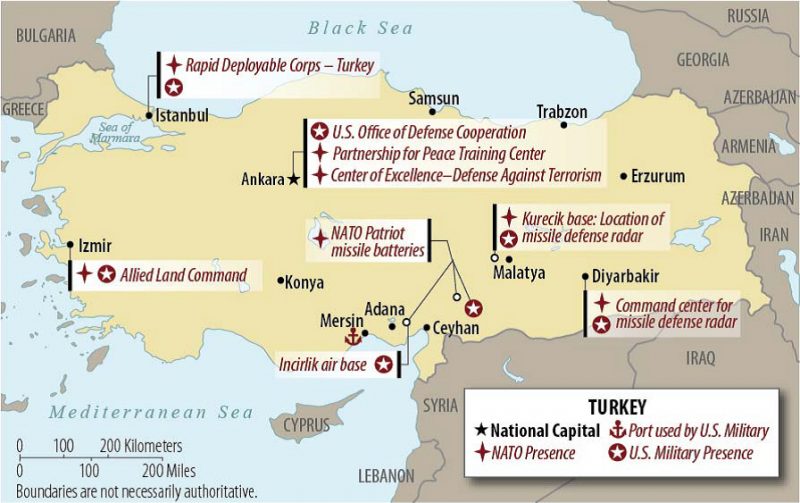 Why Sanctions Against Turkey May Backfire

Turkey’s incursion into Syria, many have dubbed an invasion, is exposing some fault lines in the alliance with a NATO member. With tough U.S. sanctions looming against its economy, it is important to understand their negative impact on our interests. This is why sanctions against Turkey may backfire, and why Turkish President Erdogan and his foreign minister discounted them out of hand.

Turkey is home to several U.S. military assets to include a major NSA listening post in Adana that you won’t find any trace of its existence on the Internet.

A WEB OF U.S. ASSETS

A closer look at the map above shows the location of these assets, one of which is the Incirlik Air Base. Incirlik is a forward, rapid deployment air base covering major areas of the Middle East the U.S. built in 1951. Its importance lies in the fact it is home to U.S. nuclear weapons as well.

In fact, the Associated Press published a story about this subject matter. In it, AP wrote:

Frayed U.S. relations with Turkey over its incursion in Syria raise a sensitive question rarely discussed in public: Should the United States remove the nuclear bombs it has long stored at a Turkish air base?

Now that the threats of sanctions are real, cooler heads are beginning to ask revealing questions: Is it in our best interests to alienate a NATO member we rely upon for self-protection? According to AP again, the U.S. may have as many as 50 B-61 nuclear bombs stored under heavy security at Incirlik (See video below of the B-61 flight test).

It is important to remember that the North Atlantic Treaty provides a security clause in which if one member is attacked, NATO considers it an attack on ALL members. Whether Turkey can make a legal argument that sanctions represent an “attack” remains to be seen. But then which NATO member will object to the 800lbs gorilla hovering over?

Because of important military assets and a NATO membership, the Congressional Research Service, whose job is to inform the legislative branch, wrote a detailed report about some of the sanctions Congress can deploy. However, CRS also stated a warning:

U.S.-Turkey tensions … along with possible sanctions on Turkey, could have broad implications for bilateral relations and defense cooperation. It also could affect Turkey’s role in NATO.

In other words, let us not shoot ourselves in the foot folks.

What complicates matter even more is another small fact about the North Atlantic Treaty very few people know. The membership is permanent. Only a member can request to exit the club. Hence, it’s a lifetime membership with no clause for “money back guarantee”. The U.S. is stuck with Turkey, and any talk of crippling sanctions is just over-the-top bravado for the naive among us.

Not only will sanctions against Turkey backfire, but they may not be in our best interests. Why? Because we may have more to lose than Turkey in staining the relationship. In fact, we need to neutralize the Turkish Muslim Brotherhood President by not rocking the boat too violently.

Having said that, TFS interest in seeing the Syrian refugees go back home protected by a safe zone is what drives every article we write. This interest precede the interests of the liberal Kurds we have an affinity for.

What the United States should do, at this juncture, is either go along with the project while taming its possible religious zest, or strike an agreement with Putin to remove Assad from power so that Syrians can live free from his butchery. At what price? Putin has a long list of needs. Discover what will make him turn on the psychotic Assad.

Meanwhile, the Kurds have to wait.

Herzl wrote in his memoirs in 1898 that he senses the creation of the State of Israel to be near. It took another 50 years to realize his dream. The Kurds may need to wait a bit more for their Kurdistan.

Another worthy note. It took the United States between 1973 and Desert Storm of 1991 to rid itself of the stigma of another war. If the Iraq War ended in 2007, then one must assume by 2025 the public may be ready to liberate the Middle East of Iran and their tentacles in Damascus, Baghdad, Sana’a, and Beirut. it may take us until

Why Sanctions Against Turkey May Backfire