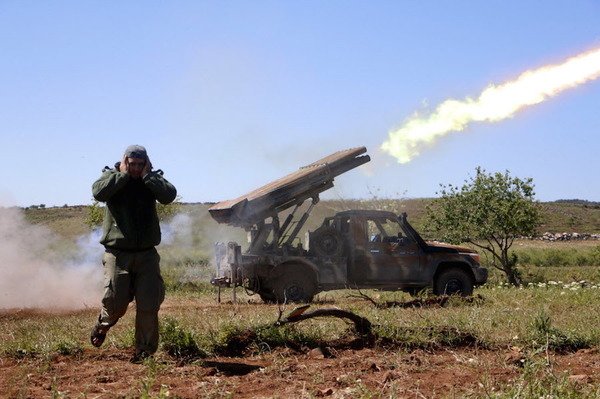 Why Iran is standing by its weakened ally Syria

April 27, 2015 2:34 pm 0
U.S. peace talks on Syria over before start?
Assad Desperation is Becoming an Embarrassment
Assad Exterminating Prisoners Just Like Hitler Did

BEIRUT, LEBANON — Iran has proven critical in helping keep Bashar al-Assad in power after four years of bloody war, dispatching thousands of soldiers and paramilitary fighters to bolster Syria’s flagging army and billions of dollars in loans to prop up its economy.

Yet, despite this massive show of support, the Assad regime in the past month has lost ground against opposition forces in a series of battlefield reversals. And, crucially, it faces a serious shortage of fresh soldiers and militiamen willing to continue fighting, making it ever more reliant on Iran, its close ally of 35 years.

Iranian officials have declared that Syria is of supreme strategic importance, and appear unwilling to reconsider the military option in defeating the anti-Assad rebels. The question is how much longer Iran, a country burdened by international sanctions, can afford to continue allocating funds, materiel, and manpower to Mr. Assad while incurring ever greater animosity – and now blowback – from the region’s Sunni states.

“The Iranians could probably provide additional foreign fighters … but at a certain point the marginal utility of additional foreign forces becomes smaller and smaller,” says Robert Ford, a senior fellow with the Washington-based Middle East Institute and US ambassador to Syria between 2010 and 2014. “It’s not that the rebels will overwhelm the regime, but I think the regime’s position becomes harder and harder as the war of attrition slowly slides against it.”

The Syrian Army is estimated to have suffered 80,000 to 100,000 dead and wounded in four years of war, dealing a punishing blow in terms of manpower and morale. To compensate for the weakened army, the Iranians brought in thousands of Iranian Revolutionary Guards Corps soldiers, fighters from Lebanon’s militant Shiite Hezbollah party, and Shiite paramilitary forces from Iraq and Afghanistan. It also helped establish the 80,000-strong National Defense Force militia composed of Assad loyalists, mainly Alawites, a Shiite splinter sect to which Assad belongs.

While Iran’s military aid has bought the Assad regime some breathing space, it still lacks sufficient strength to launch multiple offensives and is forced to choose carefully where to deploy its forces.

“There is not a critical mass available [for Assad] to achieve victory,” says a former Syrian official who requested anonymity. “To prevail, 200,000 to 300,000 mothers need to be convinced to send their sons to fight. But why would a Sunni mother and father send their son to die for Bashar al-Assad?”

The critical manpower shortage is compounded by the recent coordination on Syria policy between the region’s Sunni powerhouses – Saudi Arabia and Turkey – in cooperation with Jordan and Qatar.

In early March, Saudi Arabia’s new monarch, King Salman, and Turkish President Recep Tayyip Erdogan, agreed on the “necessity of enhancing support to the Syrian opposition in a way that aims at yielding results.”

Those results have been quick to materialize. In just the past month, the Assad regime has lost the city of Idlib in the north, Bosra ash-Sham in the south, and the Nasib border crossing with Jordan. On Saturday, rebel groups captured another northern town, Jisr al-Shughour. In the south, an Iran-led offensive in Deraa and Quneitra provinces has stalled against tougher than expected opposition, while a much-anticipated Hezbollah-led offensive in the Qalamoun region north of Damascus appears to have been postponed.

The capture of Jisr al-Shughour means that anti-Assad forces control the two largest urban areas in Idlib Province. It also allows them to mount a westward offensive on Latakia, a regime stronghold on the Mediterranean coast. If the rebels succeed in driving Assad’s forces further south from Idlib, the link between Damascus and the northern city of Aleppo would become perilously thin.

Syria represents the vital geo-strategic cog connecting Tehran to Hezbollah, the nucleus of an “axis of resistance” against Israel and Western ambitions for the Middle East.

In February 2014, Mehdi Taeb, a senior Iranian cleric, underlined the importance of Syria to Iran in stark terms, saying it is a “strategic province for us.”

“If the enemy attacks us and wants to take either Syria or [the Iranian province of] Khuzestan, the priority is to keep Syria,” he said. “If we keep Syria, we can get Khuzestan back too, but if we lose Syria, we cannot keep Tehran.”

Diplomatic sources in Beirut estimate that Iran spends between $1 billion and $2 billion a month in Syria in cash handouts and military support. Staffan de Mistura, the United Nations envoy to Syria, recently told a private gathering in Washington that Iran has been channeling as much as $35 billion a year into Syria, according to one of the participants at the meeting.

“Iran has always considered Syria its gateway to the Arab region. I don’t think that assessment has changed,” says Randa Slim, a Hezbollah expert and a director at the Washington-based Middle East Institute.

Still, Assad’s recent setbacks in the south and north of the country may compel Iran to reconsider its military options in Syria, including the possibility of advising Assad to abandon Aleppo if the rebels extend their reach in Idlib province.

The loss of Aleppo, Syria’s largest city and the country’s commercial engine, would represent a major psychological blow to the regime. But Iran’s strategic interests in Syria do not require Assad’s control over the entire country, only the vital corridor connecting Damascus to Tartous on the Mediterranean coast, which runs adjacent to the border with Lebanon. That corridor would enable Iran to continue providing weapons to Hezbollah.

“Iran is not committed to the person of Bashar al-Assad.… They’re committed to preserving their interests in Syria,” says Karim Sadjadpour, senior associate in the Middle East Program of the Carnegie Endowment for International Peace.

No partners other than Assad regime

However, Iran has invested so heavily in the regime – to the exclusion of other parties in Syria – that Tehran has little choice but to double down on its embattled ally.

“Outside the regime, Iran has no contacts in Syria. Syrian businessmen trade with other Arab countries,” says the former Syrian official, adding, ironically, that the billions of dollars handed by Iran to Syria “is financing Syrian imports from Saudi Arabia and other Gulf states, not from Iran.”

If the nascent deal between Iran and the international community over the Islamic Republic’s nuclear program is concluded in the coming months, it could end the crippling sanctions on Tehran, swelling the country’s coffers once more. But the combination of a more assertive Sunni regional alliance against Assad and the desperate shortage of manpower to fend off anti-Assad rebels potentially bodes ill for the Syrian regime – and Iran’s reach into the Levant – in the long term, analysts say.

“I often think of this situation as the German army in World War I in 1917 being slowly ground down on the Western Front,” says Ford, the former ambassador to Syria. “I think it’s a slow progression, and the Iranians can slow it further, but I would be surprised if they can reverse this.”

Why Iran is standing by its weakened ally Syria