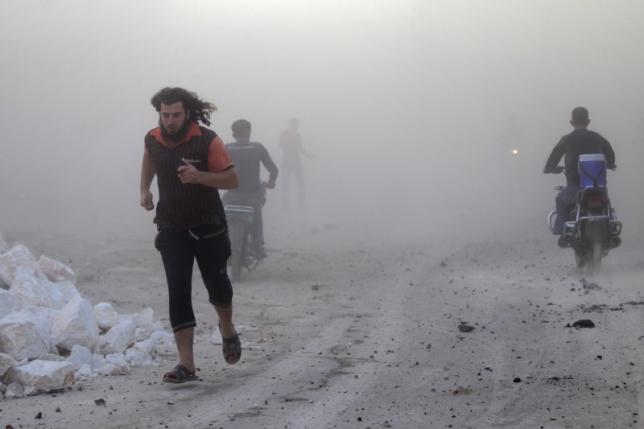 November 4, 2015 4:47 am 0
Assad Deploys New Massive Bombs Against Civilians. Thank You Barack Obama
A wave turns into a tsunami of terror
The real butcher of Sabra and Shatila is Assad

Have you wondered why Assad is not winning big with big Russian air strikes against the moderate Syrian opposition? In warfare, tactics is survival.

After the initial shock of intensive Russian air strikes, Syrian rebels on the receiving end of a major offensive say better organization and new tactics have helped them to stem losses and fight back.

A month of Russian air strikes in support of government offensives have cost the rebels in lives and supplies: commanders have been killed, bases bombed, and weapons depleted.

Supported by Iran’s Revolutionary Guard Corps and Lebanon’s Hezbollah, this is the first multi-pronged attack of its kind in nearly five years of war that have diminished the psychopath Baschar al-Assad’s control to a quarter or less of Syria.

But while it may be too early to say how this new phase of the war will play out, analysts say modest government gains so far do not appear to match the scale of its assault. Assad is not winning big, which means he is losing but at a much slower rate because every day Russia is bombing with little result is a day Russia will sink further in Syria’s war swamp.

Rebels have even regained some positions, and fighters on the government’s side are meanwhile being killed in large numbers, according to activists on the ground tallying numbers.

Rebels interviewed by Reuters say they are learning to live with Russian air strikes. They are working more closely together and using different tactics to fight back. Knowledge of the terrain is cited as a crucial advantage.

“It’s a battle of ambushes, of surprise attacks,” said a former army lieutenant-colonel who leads the Jabhat Sham group, a recipient of military support from Assad’s foreign enemies that fights under the banner of the Free Syrian Army (FSA).

New supplies of weapons from states including Saudi Arabia and Qatar have arrived, though not in the quantities the rebels would like given the scale of Russian and Iranian intervention.

Still, a steady flow of weapons including anti-tank missiles do appear to be arriving via Turkey. This may increase with Saudi Arabia and the United States promising to bolster support to the moderate Syrian opposition.

The offensives are mostly targeting areas of western and northwestern Syria held by an array of rebels including Free Syrian Army groups backed by Assad’s foreign enemies.

The war which spiraled from an uprising against Assad has killed about 300,000 people and created more than four million refugees causing crises in Europe and neighboring countries.

One of the biggest government offensives so far is south of the city of Aleppo. A rebel fighting with one of the groups there, the Sham Revolutionary Brigades, said he had never seen anything like the attack that began on Oct. 16.

“What changed for us was the huge, abnormal size, and intensity of the bombardment,” said Abu Ahmed, using his nom de guerre and speaking via a web-based messaging system.

His group, another FSA faction which has received foreign military support including U.S.-made anti-tank, or TOW missiles, lost its commander in the fighting. But one week on, Abu Ahmed said the situation had improved. why Assad is not winning big with big Russian air strikes? Because the rebels have adapted quickly and their losses have diminished as quickly.

“Yesterday there was a big Russian air strike, but we organized ourselves, with the rest of the factions. We are used to the new situation,” he said. “We camouflage headquarters, and cars, and dig trenches,” he said. “But the main factor is counter-moves – such as surprise attacks.”

Additionally, the group has been resupplied with TOW missiles which had run out last week, said a member of the group’s leadership council, Abu Ahmed Hani. “If (TOW supplies) stay like this then it is great, but the remaining ammunition is not at the required level,” he said.

Russia says its warplanes have hit hundreds of targets, including command centers, and weapons depots.

In the wooded hills of rural Latakia, another focal point of the offensive, trench warfare is helping the rebels to stave off attacks despite their depleted numbers, said Yousef Hifnawi, a fighter in the Ahrar al-Sham rebel group.

“There are people who have not come out of the trenches for more than three weeks,” he said. This is why Assad is not winning big with big Russian air strikes. They can no longer hit their targets.