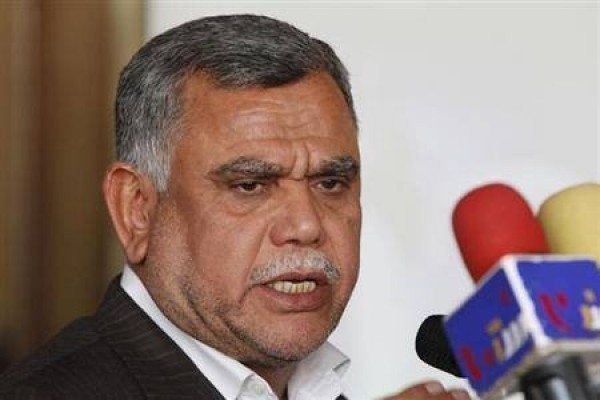 Who is Hadi Farhan Abdullah al-Ameri?

November 7, 2014 7:54 pm 0
I dare you to defeat ISIS
Obama Should Have Written Letters to IRGC Too
Extensive Information Obtained from US Sailors Captured by IRGC

Hadi Farhan Abdullah al-Ameri, known as Abu Hassan Ameri, is known in Iran by the name of Hadi Ameri. He was born in 1954 in Diyala Province (Iraq). He has an Iranian wife and his children live in Iran. He has a house in Mofatteh District of Tehran which is where the commanders of the Quds Force (QF) and the IRGC Ramadan Base reside. He had lived in Iran for a long time prior to the downfall of the former regime in Iraq. He returned to Iraq in 2003.

He has close relations with the highest-ranking commanders of the Quds Force such as Qasem Soleimani, Commander of QF, IRGC Brigadier Generals Iraj Masjedi and Ahmad Forouzandeh, commanders of the Ramadan Base, as well as other IRGC commanders. He receives his orders directly from Qasem Soleimani. When he was a member of IRGC, his bank account number was 3014. His salary code was 3829597 and he received 2601783 Rials as his monthly salary which was equivalent to the salary of an IRGC Brigadier General. During the Iran-Iraq war, he appeared as a member of IRGC in the battlegrounds and fought against Iraqi forces alongside IRGC forces.

Relation with mullahs’ regime; operations against coalition forces and those opposing Iranian regime’s policies in Iraq

Following the demise of the former regime in Iraq, Hadi Farhan Abdullah al-Ameri  continued to work under the command of the QF. He regularly visited Iran to present his reports and to receive fresh orders and to be briefed. He plays a key role in the dominance of IRGC and QF over the security, military and governmental apparatuses in Iraq.

During 2005 and 2006, Hadi Farhan Abdullah al-Ameri  established an organ called “Central Organ” in Iraq’s Interior Ministry that was tasked with assassinating and physically cleansing those who opposed the Iranian regime’s dominance in Iraq.

In 2006, by the orders of the QF and by employing experienced 9th Badr commanders, Hadi Farhan Abdullah al-Ameri  organized assassination networks against the U.S. forces. These networks used IEDs, sharp shooters and various kinds of missiles to attack the U.S. forces.

Following regional developments, especially the downfall of Muammar Gaddafi and the prospect for the toppling of the Syrian dictator which would severely disrupt regime’s regional front, Khamenei summoned his Iraqi elements for one week to participate in “Majma Omoumi Jahani Ahl Bayt” (International General Assembly of Ahl Bayt) in Mashad on September 13, 2011 and the Islamic Awakening Conference in Tehran on September 16 and 17. Khamenei’s objective was to prevent his susceptive front from being shattered in Iraq and to strengthen his grip on Iraq if regional developments prove to get worse.

Hadi Farhan Abdullah al-Ameri , the Minister of Transportation of Maliki, participated in these meetings as one of regime’s Iraqi elements under the guise of an Islamic scholar.

Since when Hadi Farhan Abdullah al-Ameri  became Iraq’s Minister of Transportation, all resources of this ministry were utilized to serve his family, the 9th Badr Corps, and the Quds Force. Hadi Farhan Abdullah al-Ameri  has trusted all the jobs in this ministry, in Iraq’s airports, and transportation to the 9th Badr personnel. He utilized and placed all the resources of the Ministry of Transportation for the transportation of special units of Shiite paramilitary forces to receive training in Iran and their subsequent transfer to Syria. Additionally, all the resources of Iraq’s airports were placed at the disposal of the QF and Quds Force used this facilities for transfer weapons consignments to Syria via Iraq.

Moreover, an office has been given to the QF in Baghdad Airport under the guise of aerial services.
Since the Iranian regime is forbidden to acquire certain equipment due to international sanctions, Hadi Farhan Abdullah al-Ameri  purchases these equipment from other countries in the name of Iraq and then smuggles them to Iran.

Likewise, Hadi Farhan Abdullah al-Ameri  gives many resources and equipment of Iraqi Airways to Iran such that the Iranian regime has been able to take care of many of its needs through this arrangement. Thus Iraqi Airways was become the primary provider of Iran’s airplane parts with Iraqi currency and Iraqi Airways plays the most role in enabling Iranian airplanes to fly. All the personnel in Iraq’s airports are affiliated with the 9th Badr Corps and are agents of the Iranian regime. Therefore, they face no problem with transferring illicit consignments.

After Hadi Farhan Abdullah al-Ameri  was appointed as the Minister of Transportation, he brought along many of his paramilitary forces to this ministry. The 9th Badr Corps paramilitary elements extensively use the facilities of the Ministry of Transportation to murder and massacre the Sunnis in Baghdad as well as other cities. Abducting and then killing the Sunnis is one of the regular methods used by elements of Hadi Farhan Abdullah al-Ameri  in Baghdad and Diyala Province to instigate terror and fear amongst people and thus spread their dominance in these areas.

Using the facilities of Baghdad Airport which falls within the jurisdiction of the Ministry of Transportation, Hadi Farhan Abdullah al-Ameri  has established a military training center for the elements that are hired by the 9th Badr. The location of this training facility is near where the Golden Division (Dirty Division) is located in the airport area. The military wing of the 9th Badr is stationed in a warehouse. These people have been brought by Hadi Farhan Abdullah al-Ameri  and they have been officially hired. Following their training, these elements are divided into groups and dispatched to different areas.

Following the fall of Mosul and the collapse of Maliki’s army, the leaders of Shiite groups, including Hadi Farhan Abdullah al-Ameri , resorted to an extensive campaign to mobilize volunteer forces. Employing volunteer forces along with the 9th Badr militias was done upon the directives of the QF to establish an organ called the Revolutionary Guards of Iraq. Since March 2014, following consecutive defeats of the Maliki’s forces in Anbar Province in their confrontations with the tribes, the IRGC Quds Force set out to create the Revolutionary Guards of Iraq although with a moderate number of forces.

Around mid-June, by orders of the QF, Hadi Farhan Abdullah al-Ameri  summoned a large number of veteran 9th Badr commanders from southern provinces to Baghdad. All these commanders were given new ranks and appointed to command positions. These commanders went through a crash course in the 9th Badr’s main base in Jaderiya of Baghdad under the supervision of QF commanders and each were given command of a section of the volunteer forces in the provinces, including Karbala, Najaf, and Babel.

In order to establish the Revolutionary Guards of Iraq, in coordination with Hadi Farhan Abdullah al-Ameri , Qasem Soleimani gave orders for mobilization of a sizeable number of paramilitary forces in Diyala Province and to dispatch them to the QF training center in Ibrahimiya District of Karbala to recieve special training.

The elements of the QF in Karbala set up another training base in Tal Zaynabiya in addition to the one in Ibrahimiya District of Karbala. This new center was designated for those who lack any military training and cannot even use side arms.

Following advances made by revolutionary tribes and a series of setbacks suffered by Maliki forces in various fronts in Anbar and Mosul Provinces, a number of Quds Force experts and commanders were stationed in Baghdad and began evaluating the battlefronts.

The Quds force military experts in their initial analysis in order to confront the tribes’ advances reached this conclusion that the fast and urgent solution in the current situation was the use of their associated militants, such as the Asaeb al-Haq, Kataeb-Hezbollah and Badr militants, and that the militias must be reorganized. Under orders of Qassem Soleimani and by taking the Revolutionary Guards’ Bassij forces in Iran as an example, the 9th Badr forces were dispatched to various battlefronts, including Diyala Province, with a new organization of their ranks and files to strengthen Maliki forces. In this reorganization he called on all of the veteran and even former Badr commanders – who for years were Quds Force mercenaries in Iran – and dispatched them as Badr battalions to combat missions. In line with these measures, Abu Mahdi Mohandes, former commander of the 9th Badr and a close confidant of Qassem Soleimani was called for. Abu Mahdi Mohandes is currently acting as Qassem Soleimani’s Chief of Staff in Iraq.

Hadi Farhan Abdullah al-Ameri  has been appointed by Khamenei as Qassem Soleimani’s deputy and in charge of all military affairs in Diyala Province. All forces including Asaeb, Badr, Kataeb and other military forces are under his command. Qassem Soleimani has made it crystal clear for Hadi Farhan Abdullah al-Ameri  that Maliki and his government have no responsibility over defending Diyala Province and only Ameri is completely and solely responsible for this province.

Veteran members and new volunteers associated to the Badr are formed as independent infantry battalions, and they have not been merged with government military and security forces. In fact, they are under the command of Hadi Farhan Abdullah al-Ameri  himself. Upon Soleimani’s orders, the veteran Badr commanders who have been utilized in the current situation have been promoted and receive special salaries and benefits. For example, those individuals who were lieutenant colonels in Iran are currently deployed as full colonels.

In late July an inhumane crime was carried out by 9th Badr elements under the command of Hadi Farhan Abdullah al-Ameri , Maliki’s then transportation minister, abducting and murdering a large number of Sunni youths in the al-Azim, Khalis and Baquba regions of Iraq’s Diyala Province. These mercenaries carried out this massacre with the goal of saber-rattling and creating a climate of fear amongst locals. As such, subsequent to murdering the Sunnis, they hung the corpses of the victims from bridges and electric poles in Khales and Baquba under the pretext that they were ISIS members.

According to local police in Diyala Province, militants linked to Hadi Farhan Abdullah al-Ameri  executed 15 Sunni youths and left them hanging from electric poles in a public square.

The objective was to prevent Sunnis from remaining in the melting pot cities. The victims were those who were abducted a month prior to their murder.

This is a tactic used by Badr militants, keeping the corpses hanging for a longer period to terrify the local Sunnis.

Who is Hadi Farhan Abdullah al-Ameri?