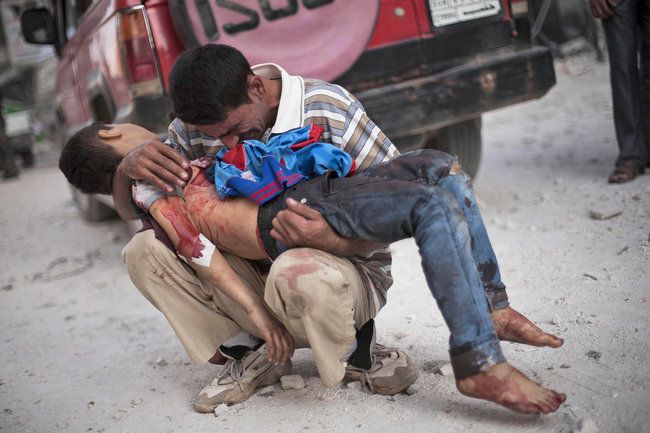 Who Else Would Like to Kill and Abuse Syrians?

Here is a story history is recording to shame all the grandchildren of those who are in power today playing with the lives of the Syrian people like children play with matches.

Once upon a time, so far away there lived people who never hurt anyone but whose destiny was charted by the oppression of a mad and violent ruler. After 45 years of extreme terror at the hands of the madman, they arose in unison against his regime in pursuit of their freedom and liberty.

The madman, supported by evil countries, unleashed hell upon his own people’s unarmed men, women, and children. No life was spared, and no weapon was left unused. The madman burned them with napalm, tortured them with electricity, gassed them with sarin, and barrel bombed with the crudest and deadliest weapon ever invented.

It was open season upon millions of helpless people whose only sin was to seek freedom from the madman’s tyranny.

Across oceans, Western governments watched with horror upon the onslaught taking place, met over conferences, debated ideas and hollow concepts, expressed their regrets whenever there was a camera around, and donated funds to cloth the hungry and to treat the injured.

But when asked to stop the madman, they all balked. They all left the madman to finish his masterpiece and none had the courage to stop his carnage.

When the West abandoned the helpless Syrian people to the madman, it also abandoned them to historically well-known extremists groups like al-Qaeda, and new terror groups just forming. And it knew it one year into the Syrian Uprising. Now the West had every reason to concoct and weave the rhetoric it needed to unleash its own weapons upon the Syrian theater of war.

So, instead of the West dealing with one madman it ignored, it must now deal with Muslim extremists running around like rabbits in a whorehouse.

Instead of the Syrian people dealing with one madman the West ignored, they must now deal with a superior Western Air Force killing their children and women like the madman is.

How is that for intelligent design? A policy to kill and abuse Syrians that makes the West look as bad as the madman it publicly denounced.

Anyone else looking to abuse Syrians, please take a number.

All because the West, and especially Barack Obama, sat on its buns and ignored the pleas of the Syrian people to help free themselves from their terrorist madman.

As if this was not enough, a U.S. ally makes a deadly mistake that kept the madman continue his killing spree by striking a side dumb deal with his regime. Its dumb deal, which trusted the dishonorable madman to act honorably, not only increased terror in the region, but it may even get their own people killed in the future by allies of the madman who became stronger as a result of the dumb deal.

How is that for brilliant?

Honestly, who else would like to kill and abuse Syrians some more?

But before you answer this question, ask yourself another one. Have you noticed something strange though? The more we ignore the plight of the Syrian people the more complicated it gets, and the more heightened domestic terror becomes?

Should that not ring some bells that there is a direct correlation between the plight of the Syrian people and Western stability and safety?

Who else is considering to kill and abuse Syrians in the hope it benefits their country?

The more we ignore the madman killing Syrians, the more dangerous the region and Western world become. Coincidence? Not really.

Consider this: Ever since the West ignored the madman, terrorists have sprung from 80 countries, at least two Western coalitions are fighting terror directly in at least half a dozen Arab countries, and a future sectarian war is upon us to affect every Western voter’s pocket.

Please consider the costs to the policy of letting a madman kill and abuse Syrians without lifting a finger.

Many do not realize the costs associated with their apathy towards Syria. The cost of doing nothing, or conspiring with the regime, are far superior to stopping a madman from his propensity to kill and abuse Syrians.

Who Else Would Like to Kill and Abuse Syrians?