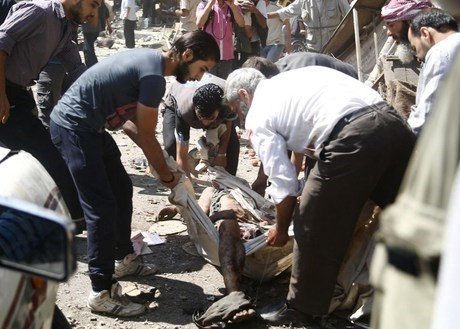 August 16, 2015 9:52 am 0
Choosing one’s wars
The Glorification of Suicide Bombers: Response to CNN’s John Blake
The Brainless, the Brainy, and the Braves

While Obama strikes ISIS the terrorist, he ignores Assad the terrorist massacring the innocent and the helpless.

At least 100 civilians were killed Sunday in a string of Syrian government air strikes on a marketplace in Douma, a rebel-held town near Damascus, a monitoring group said.

At least 300 people were injured, with the death toll — most of them civilians — likely to rise as many of the wounded were in serious condition.

Wonder no more why ISIS will never be defeated. The Syrian people see it as a protector at the same time they see America as the evil supporting Assad with its Iran deal.

“The regime carried out four air strikes against a market in the center of Douma. The preliminary information suggests most of the dead are civilians,”

The activists said locals had gathered at the site after the first strike to help evacuate the wounded when more raids hit.

A video posted online by activists of the aftermath of the attacks showed an intersection strewn with rubble and twisted metal. While Obama strikes ISIS, he ignores Assad striking the innocent.

The fronts of several buildings nearby appeared to have been sheared off by the force of the blasts, and several vehicles were overturned and crumpled amid the rubble.

Douma lies in the rebel bastion of Eastern Ghouta, a region outside the capital that is the regular target of government air strikes.

Earlier this week, Amnesty International accused the Syrian government of war crimes in Eastern Ghouta, saying heavy aerial bombardment was compounding misery created by a government blockade on the area.

Baschar al-Assad attacked Eastern Ghouta in August of 2013 with mustard gas that killed 1,429 civilians the majority of whom were women and children.

The Sunday strikes on Douma came as U.N. humanitarian chief Stephen O’Brien made his first trip to Syria since taking the top aid post in May.

This video says it all.