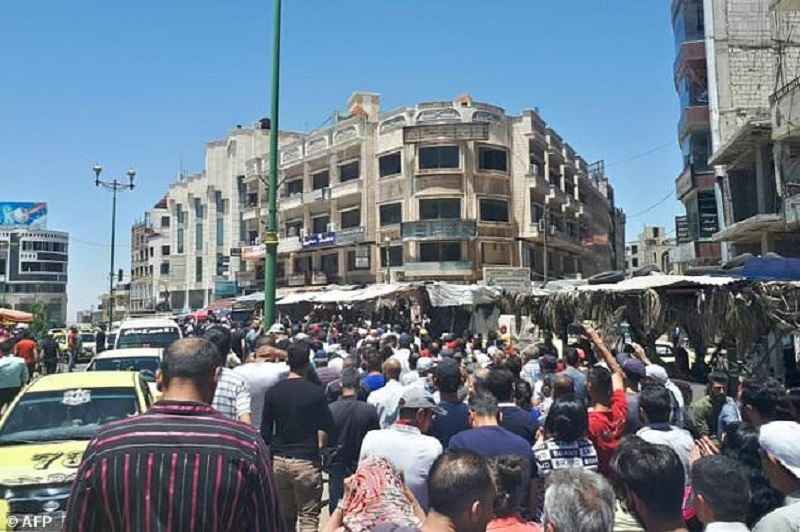 June 10, 2020 7:30 am 0
Possible Doomsday for the Assad Evil Regime
UK Must Treat Asma al-Assad Like it Treats ISIS Wives
Salute the Alawites Revolting Against Assad

For those following Syria, its currency, between Saturday and Monday of last week, plummeted from 2,300 to 3,000 Liras to the dollar. That’s a 30% decline on top of previous declines that saw the Lira tumble from 47 for each dollar to today’s levels of 3,000. As this goes on, Assad of Syria is looking for ways to bilk the wealth of Syrian businessmen. Folks, while Assad and wife swindle Syria’s elites like Rami Makhlouf, Syria is imploding before our eyes.

The Daily Mail in London captured the mood of the country with an article it entitled: “Syrians Fear Hunger as Record Devaluation Sparks Protests”

It cited Jessica Lawson of the World Food Program when she told the daily mail:

WFP estimates that 9.3 million Syrians are food insecure — more than ever recorded.

Those numbers do not include up to 5 million Syrians the U.N. is assisting with food and shelter. If one considers the Syrian population of 17 millions, some 14 millions are either hungry or going hungry.

Assad, you are a genius!

What prompted this steep devaluation of the Syrian Lira?

There are several factors to consider. One of which are upcoming and devastating U.S. sanctions named after the photographer Caesar who smuggled out of Syria 55,000 images of Assad torture victims. U.S. Congress passed the Caesar Syria Civilian Protection Act due to go into effect on June 15. The sanctions will have a calamitous impact because they will touch any country that lends a hand to Assad.

Hopefully, President Trump will not ignore Russia, which we believe he will. If he does, Russia will become a thoroughfare of goods and services reaching Syria, which will help Putin collect racket fees. We believe Trump would be the last person to object because of his incessant praise of Vladimir Putin..

Another factor playing a role is the fear Assad and his wife Asma — the tumbleweed of the desert — struck into the hearts of every businessmen in Syria when they swindled the Makhlouf wealth. An act from the playbook of Mohammad bin Salman who extorted $100 Billion from wealthy Saudis. Both represent the cons of mafiosi in their natural habitats.

PEOPLE ARE PROTESTING THE REGIME AGAIN

The economic decline and devaluation of the Syria Lira is pushing the Syrian people to their limits. In Sweida, a Druze enclave, people went into the streets demanding the fall of Assad.

Sweida24, a local news website, reported that on Tuesday June 9, 2020, men and women protested in front of the headquarters of the provincial authorities. Then they marched through the city’s streets while chanting anti-regime sound bites as the video below shows.

Syrians are tired of the Assad regime. They are going to war as a sacrificial attempt to force the world to listen, but both Iran and Russia have complicity acted against the interests of the Syrian people to shore up an incompetent man unable to control his violence. Both countries will regret their support because mistakes on such a scale always result in a price to pay.

For Assad today, there is no exit strategy but to compromise and share power with the Syrian people. He is still stubbornly clinging unto his father’s legacy that worked 50 years ago. Today, the world is different, and the people are demanding equality and justice. Not dungeons of torture and violence against women and children.

Until Assad and his shopaholic wife Asma get this message, their roller-coaster ride is going downhill at a dizzying speed with no way to stop it. They may have just realized it when the Lira dropped its value by 30% in 2 days.