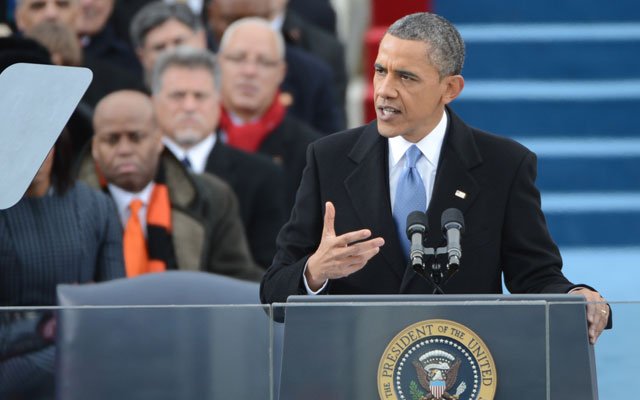 President Obama’s Inaugural Address was fully dedicated to organizing domestically. For the few sentences he uttered on international affairs, he was a contrast in vivid colors. His actions, so far, have been just the opposite of his words.  When words become meaningless, their author becomes as meaningless.

In his own words:

America will remain the anchor of strong alliances in every corner of the globe. And we will renew those institutions that extend our capacity to manage crisis abroad, for no one has a greater stake in a peaceful world than its most powerful nation. We will support democracy from Asia to Africa, from the Americas to the Middle East, because our interests and our conscience compel us to act on behalf of those who long for freedom. And we must be a source of hope to the poor, the sick, the marginalized, the victims of prejudice – not out of mere charity, but because peace in our time requires the constant advance of those principles that our common creed describes: tolerance and opportunity, human dignity and justice.

Obama has all but forgotten that on Syria, he has not been a source of hope to the poor, the sick, the marginalized, and victims of prejudice. Nor did he think advancing peace in Syria by defeating the terror of Assad through meaningful support of secular anti-Assad forces is essential.

We would almost bet the words “victims of violence and rape” would have entered the speech had it not been for Syria’s tragedy. In Obama’s world, human dignity for Syrians can wait. When words become meaningless, the author becomes as meaningless.

History can be manipulated, but most often has a sense of getting it right. With a media that holds the President unaccountable is a recipe for a bad history. Can we spell Benghazi, Algeria, Syria, and more terror in general? Obama’s weakness stares us all with an affectionate incompetency.