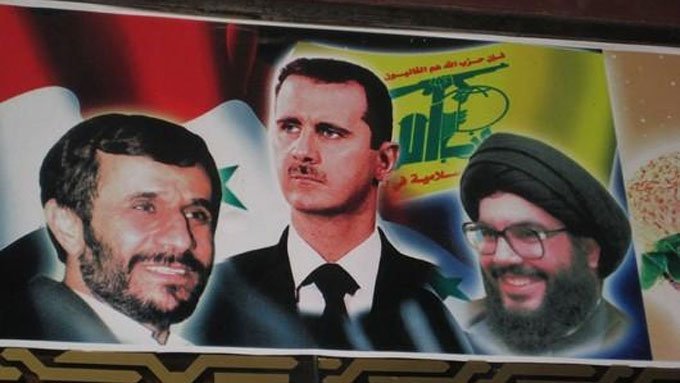 “Khanet el-Yek“ in Backgammon Arab-Farsi lingo (column one) refers to an untenable position one finds himself when playing an opponent blocking his pieces no matter the dice one throws. If one analyzes Assad’s position today, it is obvious that Assad finds himself in “Khanet el-Yek” because of his infantile policies. Here is why.

Besides a Syrian economy, trying as it may, to co-exist with the stinging US sanctions and a drought severely affecting its agrarian base, Assad also faces dwindling oil revenues, reliance on neighboring countries whose eagerness to help never comes at their own expense (Turkey’s vast water resources trickles into Syria and Iraq), and a long list of Arab oil-rich investors looking for “deals” rather than investments, which inevitably dilutes the economy further as the country’s assets become at the mercy of intractable valuations. After all, kings with cash are double kings.

But more importantly, Assad is squeezed today between his father’s past and an unpredictable future of his own choosing.

The US is pressuring Assad to make a U-turn in his foreign policy on a host of issues all related to constants Assad relies upon to survive; historically speaking, the US policy to engage the Assads has always been wrapped with a golden parachute often used successfully to bring them into the US fold (Assad father never feared regime change and his brother Rifaat, bathing in the blood of thousands of Syrians, roams Europe a free man). But unlike the past successes of Israel and the US with Hafez al-Assad, this time around Iran is playing the role of a spoiler as it crushes a weaker Baschar al-Assad to remain faithful to her cause of empirically ruling the region.

In this Khanet al-Yek position, Assad is attempting, unsuccessfully so far, to play both sides for time hoping that, between the US and Iran, whomever wins will also be his future partner. The problem is that both the US Administration and Iran are too familiar of this long tradition the Assads have perfected over the years and are having none of it. To both, the predictability of the family ruling Syria illegally is a long boring read.

Witness the grotesque and unrelenting rhetoric of Hezbollah. Besides the threats it lobs at Israel, the fiery speeches and statements are also intended to poke the US State Department to pressure Assad even more. Why? Because Iran wants to maintain control over his intentions. When Hezbollah speaks, Assad confesses. Conversely, the US timely meetings with Assads’ cohorts for diplo-talk are far from being shrouded inÂ secrecy. The US wants Iran to know that they are applying pressure on Assad to weaken the Mullahs’ resolve.

In this boxing match where both boxers (The US and Iran) are openly hostile to each other and where the audience of Arab and non-Arab regimes have taken sides openly, Assad is like Vaseline keeping the punches harmless. But patience is running thin in the US because Obama is under pressure to score a success in foreign policy and Iran feels compelled to keep her Assad protective shield until it has built its first nuclear bomb.

Meanwhile, the Syrian economy continues on its downward slippery slope and Assad is at a loss what to do to please both sides so that he can lift US sanctions and at the same time continue protecting his regime through applying the doctrines of hate and resistance. It’s the Khanet el-Yek for Assad. He needs the Syrian economy (The US) and resistance and hate (Iran) to survive but cannot have them both simultaneously.

Further, Assad is trying to play arbiter between the US and Iran. Secret trips to Iran by the trusted Mohammad Nasif Kheir Bek have become almost routine and whose partial agendas are proposed by the Syrians as a token of goodwill to the Obama administration but whose purpose is simply to buy time. It seems that the US State Department is not too indulging of these trips because US Diplomats continue to be pressured by Republican Members of Congress to yield some kind of Syrian results.

Take for example the last secret trip taken by Nasif to Iran just last week. Nasif, based on my reliable sources, was visiting Iran to inquire about a crescendo of statements from Hezbollah aimed at whipping the region into a war frenzy. To the US, this seems like something US Diplomats may undertake had the US and Iran been on, Embassy-to-Embassy, speaking terms. To Iran, this is part of their methodology aimed at testing Assad’s loyalty to their cause because they know the Assads are loyal to no one but themselves.

The Syrian role of playing an arbiter is more convenient to Iran than the US but how can the US complain if Assad commissions himself with a mission the US may, under normal circumstances, be very amiable to? Diplomacy is what diplomats do. Assad is buying time Obama does not have and come September, when talks of “foreign policy failures” hit the airwaves in the US as the battle brews over Obama’s domestic policies, the State Department will come under even more pressure as a way to point to the White House failed foreign policy approach.

Whether Secretary Clinton will be eager to slow the process though by showcasing the value of Nasif’s trips to skeptics on the Hill remains a mystery. After all, Hillary Clinton is not burdened by a foreign policy failure it will stick more on Obama than sweat on a shirt? Probably not considering the recent poll made public by her close advisor and friend James Carville to the surprise of Washington observers — For those who missed it, the poll states that 55% of Americans believe Obama is a socialist. Chicago-style politics meet Clinton-style undermining tactics.

Other information pieced together from speaking to different sources in Europe and Syria have also confirmed a fact that the CIA is probably aware of. Iran has a Syrian contingency plan for regime change in case Assad bolts prematurely or turns the tables on Hezbollah because of US pressure. It is unlikely that such scenario will ever materialize but the Iranian calculations are far more superior to Syrian and sometimes US calculations in the Middle East.

With Iranian influence on the rise inside Syria, regime change of Assad by the IRGC is tantamount to flipping a switch. Such a scenario is most unwelcomed by Syrians, the US, or Israel for the obvious reasons. But, once again, Iran finds herself one step ahead of the US and its allies who have yet to conceive of such a plan. When Assad is enemy number one for the west, the west remains committed to his protection. When Assad is friend number one for Iran, Iran remains committed to the contingency of regime change for Syria. Any wonder why Iran is winning in the region?

Why worry when Assad and Abdullah agree?
The Non-Punishable Terror of Car Bombs
Will Bahrain Fall to Iran After Lebanon?
Radicalism 567