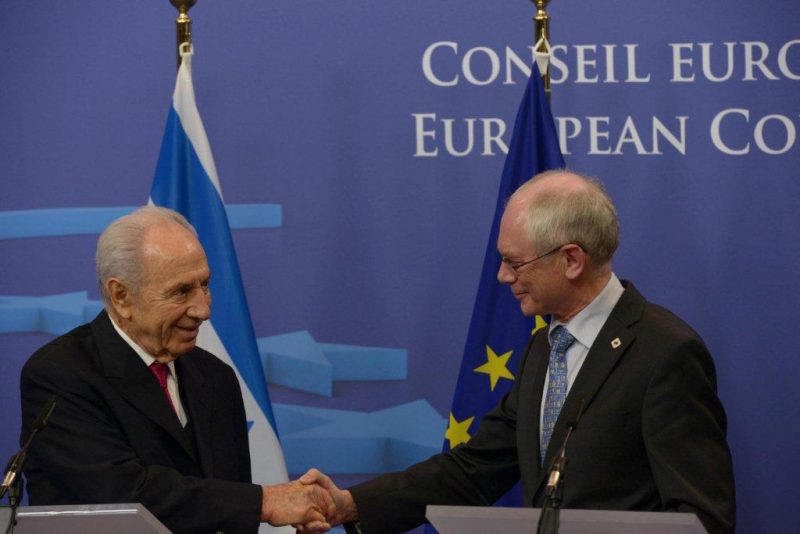 When Right Has Left and When Left Cannot Be Right

March 12, 2013 1:59 pm 0
Bird of a Feather Flock Together
Netanyahu says he will not let Iran take strategic control inside Syria
Justice or Islamism?

Israeli President Shimon Peres addressed the EU Assembly this morning, the first Israeli President to do so in three decades. This is the moment one realizes when Right has left and when Left cannot be right.

In his address, Peres called on the Arab League to dispatch an Arab force of blue helmets to stop Assad from killing the children of Syria.

The Arab League can and should form a provisional government in Syria to stop the massacre, to prevent Syria from falling to pieces. The United Nations should support the Arab League to build an Arab force in blue helmets.

He continued by justifying his choice of words with

[the free world] cannot stand by when a massacre is carried out by the Syrian Bashar al-Assad against his own people and his own children.

Blue helmets are peacekeepers, not a fighting force. They would not be able to stop the massacres, unless Peres veiled his message with oxymoronic statements in order not to veer too much from his left politics and an EU Assembly unwilling to venture into the cold reality of what it takes to stop the massacres.

An Arab League taking the time to build its own NATO? Not a chance. There is a good reason why the US maintains dozens of US military bases in the Arab countries while Arab rulers maintain a chronic and irresponsible grip on freedoms and economic parity.

Furthermore, Peres stood against western intervention citing what the likes of al-Qaeda and the MB think by saying:

The intervention of Western forces would be perceived as a foreign interference.,

Never mind people like us who see the right western intervention as opening a new tunnel with light shining at the end of it instead of remaining in the same tunnel of obedience Arab rulers and religious Islamist zealots favor.

People with better knowledge of Israeli domestic politics may have a better explanation of what Peres meant or wished for; as far as I am concerned, it took courage to state the obvious; never mind the doubts of a Syrian dissident who watched too many promises and too many leaders fail the Syrian people.

Most of the Right, in the US and elsewhere, has abandoned Syria and many on the Left listen to their hearts but cannot make up their minds; and when they do, it is as timid as it gets. Just remember wimpy Barack Obama. When Right has left and when Left cannot be right

Falling in the cracks of indecisiveness and abandonment are the helpless Syrian people whose voices have been muted after two years of people listening to their cries for help.

We are the broken records of international politics.

When Right Has Left and When Left Cannot Be Right