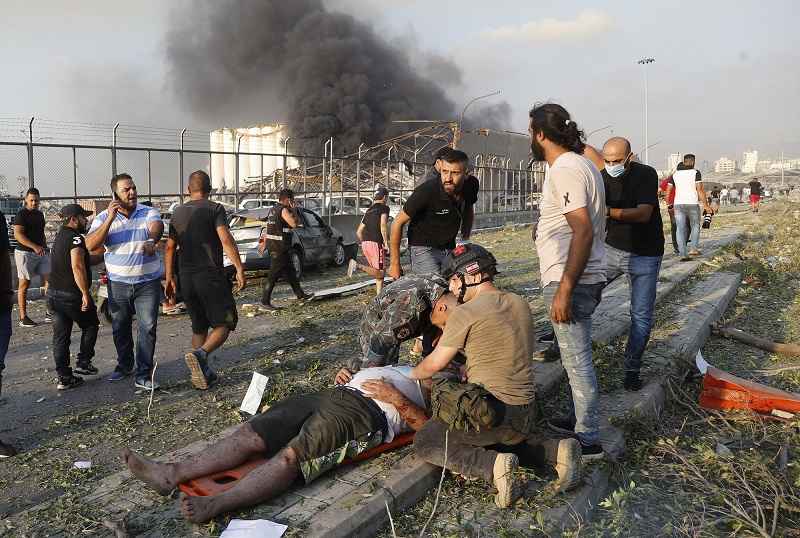 What is Mohammad Zarif Doing in Lebanon?

August 16, 2020 2:28 pm 0
Similarities Between Trumpism and Assadism
John Bolton Revelations Show the Red States Have Elected a Gangster
To Hell With 2020 Starting With COVID and Ending With Trump

Less than 24 hours after the arrival of David Hale, U.S. Undersecretary of State for Political Affairs, to Beirut, Iranian foreign minister Mohammad Javad Zarif lands in the same city as well. Usually, Iran does not dispatch its top diplomat unless there is a mission to explore, deploy, implement, or execute. So what is Mohammad Zarif doing in Lebanon? Was he there to neutralize Hale’s mission, or do the Ayatollahs have a more sinister goal?

WHAT IS MOHAMMAD ZARIF DOING IN LEBANON?

Either way, whenever Iran lands in a country, trouble follows. For its people, its economy, and its military. Witness all the wars raging in countries where Iran has interfered in their internal affairs. Will Lebanon be next now that the majority of the Lebanese people are demanding structural changes, which include the dismantlement of Hezbollah and for which most of the world agrees with them?

What are the Iranian orders Zarif carries for their agent Hezbollah? Will Iran tip Lebanon into a new civil war?

Only total anarchy and chaos can bring back their Twelfth Imam, and according to the Ayatollahs, maybe it’s time for Lebanon to descend into the bowls of their hell.

Their [The Ayatollahs] aim is to destroy Lebanon as they destroyed Syria, Yemen, and Iraq

BEAT AND KILL THE DEMONSTRATORS

One way to start a civil war in Lebanon is for the Lebanese Army to start killing demonstrators and protesters, who are getting bolder in the aftermath of the mysterious blast that we believe Hezbollah sparked just to facilitate the Zarif visit and its true mission. Emboldened protesters does not sit well with the turban-flaunting Ayatollahs. They want Lebanon on its knees to control every aspect of its branches of government and to forcefully convert Muslims. Just as Hitler forcefully controlled the Sudetenland in old Czechoslovakia because of its Germanic heritage. Even at the expense of starting WWII.

What plans does Zarif have for the Lebanese people? What is Tehran ordering Hassan Nasrallah, who considers himself a Shiite first and Lebanese second, to do against the demonstrators? The terror organization has already passed the necessary emergency laws, and all it needs is the green light from Tehran to start killing its opposition. Mind you, with help from the Lebanese Army it could start a new civil war.

This may exactly be the reason why Zarif came to Lebanon. Beat and kill the demonstrators using the Lebanese Army, and break Lebanon apart and break the will of its people. Their aim is to destroy Lebanon as they destroyed Syria, Yemen, and Iraq.

If Iran is to start a sectarian civil war in Lebanon, it must control fully the Lebanese Army

First steps first. For Iran to succeed, it needs to implement changes to the Lebanese Army to include sidelining the senior officers the United States built good rapport with. The United States, to a certain extent, has built good relations with Lebanon’s army to balance against Hezbollah’s interference and integrationist aims. With US influence, the Lebanese Army is as unreliable to Iran as a Bourbon is to a Scot.

Zarif mission, therefore, may be to cleanse the Lebanese Army of all western-minded generals and senior officers. A purge of sort the likes we saw in Saudi Arabia as Mohammad bin Salman emptied the pockets of all rich Saudis to fill his own. Or possibly in Turkey as Erdogan purged the military of officers with an inclination to honor Ataturk secularism. If Iran is to achieve total control of Lebanon and start a chaotic civil war, it must control fully the Lebanese Army. Just as it controls Assad in Syria.

Honestly speaking, what is Mohammad Zarif doing in Lebanon but planning its demise?

Whatever Iran has in store for Lebanon, this is not good news for the Lebanese people

One last idea that could explain Zarif’s visit revolves around the notion Iran is assisting Lebanon by lending it the capital it needs to avoid any western bailout. It’s a weak concept but nonetheless one must anticipate it.

If so, it is tantamount to buying the whole country for a song. Once you are in debt to those Ayatollahs, you might as well kiss your independence goodbye.

Where does Iran have the money to bailout Lebanon? Ask former President Barack Obama. The man who sent a plane load of cash to the Ayatollahs after giving them $150 billions. If the U.S. media did not object to his betrayal, he would have sent them a squadron of plane loads of cash.

Whatever Iran has in store for Lebanon, this is not good news for the Lebanese people. Nor is it good news for Israel, France or the United States. Because of elections, the U.S. is not a player, therefore Israel and France must step up to derail the Ayatollahs’ evil plans for Lebanon.

What is Mohammad Zarif Doing in Lebanon?