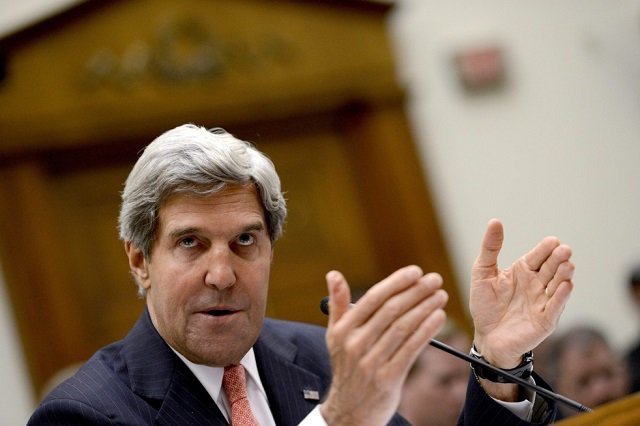 A transition period in Syria is out of the question because the psychopath Baschar al-Assad is the legitimate leader, the country’s deputy foreign minister said on Tuesday.

The majority of Syrians consider Assad an illegitimate tyrant whose head needs to be examined thoroughly. The world simply forgot the atrocities he committed against his own people, and if any leader around the world thinks Syrians are just going to turn back his torture dungeons, killing chambers, and rape oubliettes, they better wake-up.

What Assad transition period Mr. John Kerry? Or better yet, what lesson did you learn Mr. Kerry with regard to the effectiveness of your foreign policy?

“There is no transition period. There exist official institutions that are functioning. We are talking about a national dialogue, an enlarged government and a constitutional process, not a transitional period.”

What Assad transition period Mr. John Kerry? What kind of voodoo foreign policy are you practicing? Force, and only force, will remove Assad from power.

Moqdad’s comments come after a round of international talks in Vienna last week to discuss a potential end to Syria’s four-year conflict.

Neither Syria’s regime nor opposition were represented, but countries backing either side were present.

A transitional government has long been discussed as part of a peace process to end Syria’s conflict, from as early as 2012, when world powers met in Geneva to discuss the war.

The fate of Assad has been a persistent sticking point in discussions on ending the conflict, however, with the regime and its backers insisting he will not be forced from power.

Syria’s opposition and its backers insist Assad can have no role in the country’s future.