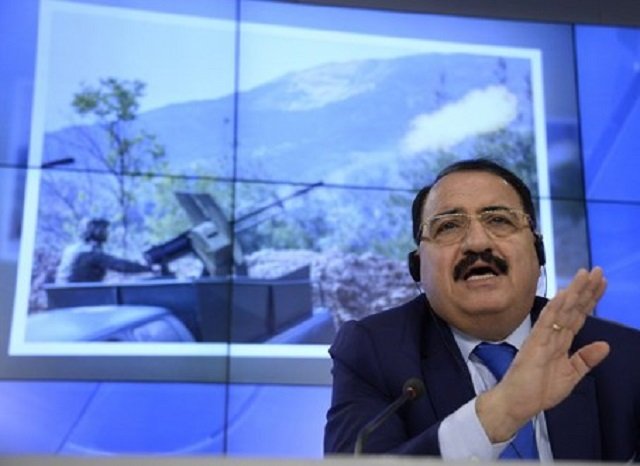 What Assad Is Forcing Orthodox Christians To Do

To watch what Assad is forcing Orthodox Christians to do, follow the trails of this unbelievable lie.

The Syrian ambassador to Moscow on Monday accused the United States of destroying a hospital backed by the humanitarian group MSF, amid U.S. accusations that Russian air strikes had targeted medical facilities in the war-torn country.

Riad Haddad, an Orthodox Christian and Syria’s envoy to its ally Russia, told the state TV channel Rossiya 24 that the hospital in Idlib had been hit earlier in a U.S. raid.

“American warplanes destroyed it. Russian warplanes had nothing to do with any of it — the information that has been gathered will completely back that up,”

It is not the Alawites who will suffer from Haddad lies and betrayal of his fellow Syrians, it is the innocent Syrian Orthodox Christians who will long after Assad is gone. That’s the real tragedy men like Haddad cannot possibly anticipate.

Do you really think Sunni Muslims are just going to forget the Assad violence? The Palestinians have been terrorizing Israel for 70 years and Alawistan is no fortified Israel. Russia will leave one day. Only the people of the region will remain. What Assad is forcing Orthodox Christians to do is make them a partner in his crimes.

MSF (Medecins Sans Frontieres — Doctors without Borders) confirmed a hospital supported by the charity was hit in Idlib, and said seven people were killed and at least eight were missing, presumed dead. Only Russian and Syrian jets fly sorties to Idlib.

The U.S. State Department, meanwhile, condemned air strikes that hit two civilian hospitals “in and around Aleppo,” identifying them as one run by MSF, the Women’s and Children’s Hospital in the city of Aziz.

The statement did not mention Idlib specifically.

It said such action “casts doubt on Russia’s willingness and/or ability to help bring to a stop the continued brutality of the Assad regime against its own people.”

Haddad said U.S. accusations “are a sign of the war of propaganda, which began in the very first days of the conflict in Syria.”

There will be a US response to this accusation most likely backed by photographic or satellite images.

What Assad Is Forcing Orthodox Christians To Do