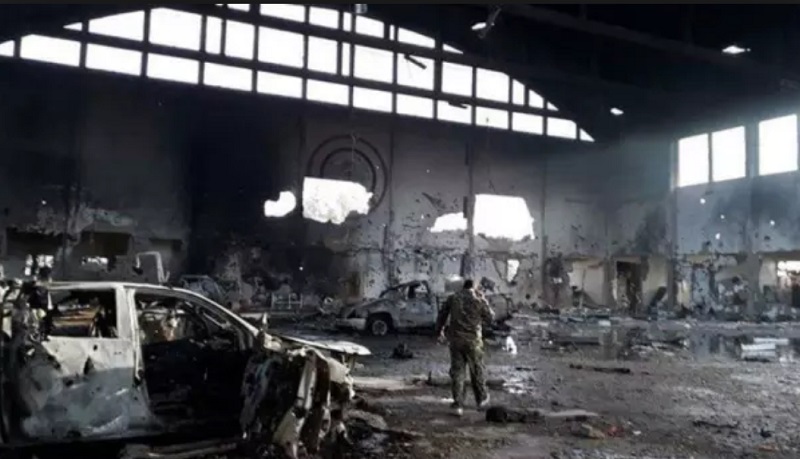 The pressure on Iran is mounting. Not one day goes by without new attacks, strikes, assassinations, and heavy-handed sanctions take their toll on Iran. The west is slowly breaking Iranian grip on Syria.

Take for example the latest assassination that many believe the Mossad carried out in Damascus. The Jerusalem Post reported:

A senior Hezbollah official and a supporter of Bashar Assad’s regime in Syria, Mashur Zidan, was killed on Sunday in a car explosion on the outskirts of the al-Kaliya bridge in the southwest of the Damascus suburbs, according to Syrian sources.
Zidan was among those close to Samir Kuntar, who was assassinated by Israel and the blame in Syria is placed on the Mossad, who they claim was responsible for the assassination of Zidan.

Syrian state television said on Wednesday that Israel struck a strategic area in southern Syria overlooking the Golan Heights where Western intelligence sources previously said Iranian-backed militias are known to be based.

Add the unusual seizure, on July 4, of the Iranian Super tanker the Grace 1 while crossing near Gibraltar and you have a western high-octane engine firing on all pistons to dislodge Iran from Syria. According to western intelligence, Grace 1 was delivering crude oil to the sanctioned Assad regime.

Surprisingly, to include one of the pistons actively engaged is none other than Russia. Putin fully understands the terror nature of the Mullahs whose Syrian grip is to serve one purpose. That purpose of annihilating Israel only destabilizes Syria further and places Russian assets in jeopardy as witnessed by the downing of the Russian maritime plane in September of 2018 by Syrian defense missiles.

IRAN HANGING BY ITS NAILS

If you can imagine a James Bond scene where a villain is hanging over the cliff by his nails, then you can pretty much see Iran in Syria today. Just hanging by few more threads that strikes, assassinations, and upping the sanctions game can only shear.

Let the bastards in Tehran who dispatched IRGC snipers to target pregnant Syrian women fall to their timely death. Syrians will never forget or forgive Iranian terror against unarmed civilians.

That’s the genius of Barack Obama’s Iran Deal. He unleashed a monster still fully armed and claimed it was for the greater good. That’s like releasing Charles Manson to a gun shop. The man still claims he was protecting the U.S. when in fact his deal was to protect Iran from the US.

Most Syrians, vocally or silently, stand by Israeli actions. In defending herself, Israel is also indirectly avenging the Iranian atrocities in Syria. Those bases Israel is destroying systematically are launching pads for Iranian terror against Syrian civilians.

We say the more strikes in Syria against Iranian terror, the merrier.

It’s a Shiite Against Sunni, Farsi Against Arab War, Stupid
Big Trouble for Israel Ahead
A Tale of Two Surges by Two Presidents
Iranian Terror 590 Opinions 1006