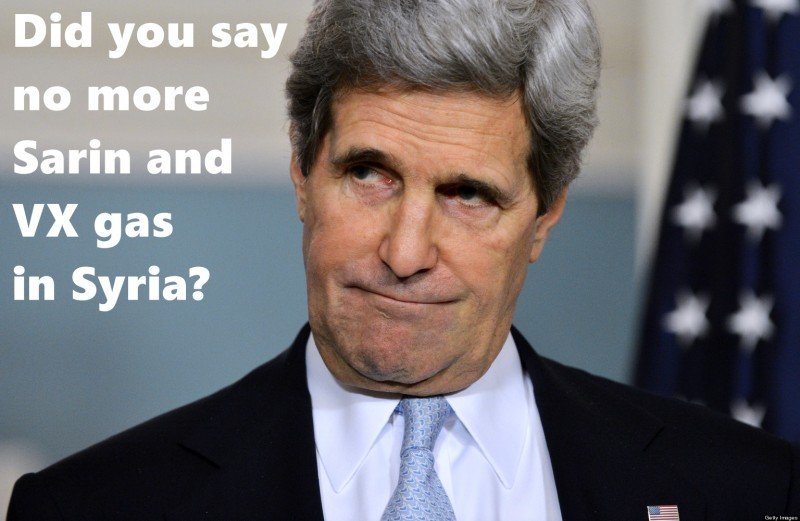 May 8, 2015 1:54 pm 0
Obama dispatches Kerry on a new mission
John Kerry Wants Syria Sold in an Iranian Bazaar
John Kerry is the Russian Ballerina Twisting in the Air Like a Chiffon Doll
International inspectors have found traces of sarin and VX nerve agent at a military research site in Syria that had not been declared to the global chemical weapons watchdog, diplomatic sources said on Friday.
In other words, weapons inspectors find undeclared sarin and VX in Syria. Thank you John Kerry.
Samples taken by experts from the Organisation for the Prohibition and Chemical Weapons (OPCW) in December and January tested positive for chemical precursors needed to make the toxic agents, the sources told Reuters on the condition of anonymity because the information is confidential.
“This is a pretty strong indication they have been lying about what they did with sarin,” one diplomatic source said. “They have so far been unable to give a satisfactory explanation about this finding.”
In 2013, the United States threatened military intervention against Syria’s government after sarin gas attacks in August of that year killed hundreds of residents in Ghouta, a rebel-controlled suburb of the Syrian capital Damascus.
But the Damascus government forestalled foreign intervention by agreeing to a U.S.- and Russian-brokered deal under which it joined the OPCW, admitting to having a chemicals weapons programme and promising to eliminate it.
The government of President Bashar al-Assad last year handed over 1,300 tonnes of chemical arms to a joint U.N.-OPCW mission for destruction. But Damascus has denied using sarin or any chemical weapons in battle during Syria’s continuing civil war.
The diplomatic sources said the sarin and VX nerve samples were taken from the Scientific Studies and Research Centre, a government agency where Western intelligence agencies say Syria developed biological and chemical weapons.
Asked about the diplomats’ account, OPCW spokesman Peter Sawczak said: “Obviously we are working to clarify Syria’s declaration. I cannot discuss any details of that process, but in due course the assessment team will issue a report.”
Reuters contributed to this article.