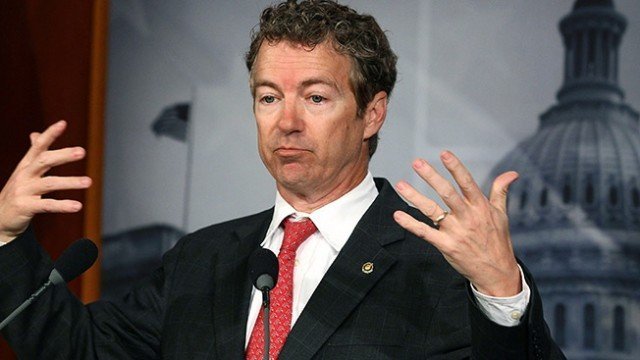 We Told You Rand Paul Was Unfit

May 28, 2015 12:35 am 0
Some Imbeciles Forgot Islamic State is Assad’s Fifth Column
The Funeral Pyre of the Three Valkyries; the Real Obama Doctrine
Falafel in Gaza

Senator Rand Paul is unfit to be a Senator let alone a Commander-in-Chief.

The freshman senator from Kentucky said Wednesday on “Morning Joe” on MSNBC that the GOP’s foreign policy hawks “created these people.” (See video below).

“ISIS exists and grew stronger because of the hawks in our party who gave arms indiscriminately, and most of those arms were snatched up by ISIS, these hawks also wanted to bomb Assad, which would have made ISIS’s job even easier. They’ve created these people.”

The Senator must be smoking something for thinking a political wish to bomb Assad created ISIS. The Senator must surely know there is no Republican hawks tooth fairy dispensing wishes and turning them real.

As for sending weapons, the opposite happened. Syrian moderates were annihilated because the Obama Administration refused to arm them, so rich Gulf businessmen picked up the slack by funding less desirable elements.

How did such a man with such a twisted concept of reality become a Senator? What is wrong with Kentucky voters? As for us here, we told you Rand Paul was unfit.

Paul has become a darling of the left because he is a reckless man with reckless ideas wearing the R label. ‘If Rand Paul looks unfit, all Republicans may look unfit’ argues the Rand Paul infatuated left.

Speaking of gall, and a word of political advice, an aide might want to remind Senator Paul which party’s nomination he is seeking. Republicans who begin their campaigns assailing other Republicans rarely succeed—especially when the accusation is culpability for a would-be caliphate that uses executions, slavery, extortion, rape and general terror to enforce oppression in the Middle East and North Africa, and whose ideology inspires jihadists world-wide.

More to the point, even President Obama now largely refrains from blaming George W. Bush for all the world’s ills, albeit with an exception here and there for old time’s sake. Maybe even he recognizes that the statute of limitations has expired for Republicans who haven’t run the executive branch for seven years and have had no perceptible influence on Administration policy.

Senator, we recommend you heed the advice of the people around you. Your angry bursts against anyone who disagrees with you is beginning to tire many American voters.

Unless your aim is to become a spoiler in the hope Bernie Sanders invites you for a Sunday BBQ once in a while.