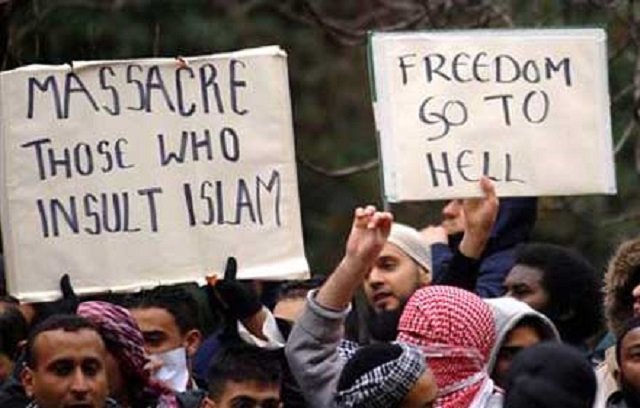 October 13, 2013 9:41 am 0
Why moderate Muslims should NOT speak out
Of Mosques and Men: Reflections on the Ground Zero Mosque
Islamism is Not the Answer

Here is a Twitter exchange that tells a story. Muslims are hopeless.

Wow: Of the eight individuals who have won #Nobel Prizes so far this year, six are Jewish, two are Israelis, and one is a Holocaust survivor.

To which we responded:

@AviMayer @BarbaraLedeen And the Muslim world wants to destroy Israel and the Jews. We are stupid indeed.

We wrote an article in October of 2004 describing how “Israelis build with Nobel Prizes and Arabs build for suicide bombers”, which we might have regurgitated again in October 2013 because nothing has changed since. Israelis and Jewish scientists still manage to advance their societies and Arabs still manage to destroy theirs with violence, ignorance, and zealotry.

We think if Prophet Mohammad and Prophet Abraham had a conversation today, it would be that short:

Prophet Mohammad: “Abraham, what did I do wrong?”

Prophet Abraham: “Nothing my friend. You helped the Jews get rid of dead weight”

No Arab or Muslims scientists will shine as long as Islam does not face its shortcomings in a world too modern for our societies to produce any meaningful progress, even if we care to halt our violent streak right away.

We marry helpless 9-year old girls as if we lived in the 7th century, we sexually deform baby girls to suck the pleasure of life out of them, and we embrace a sword to show our commitment to Islam when Christianity embraces books and Judaism embraces laboratories. What a surprise it is to watch Christianity and Judaism contribute to humanity while Islam contributes the blood of others.

The day that a Syrian, and Arab, and a Muslim can watch his civilization excel in the service of mankind instead of watching our leaders gas helpless children and women is long overdue and so far in the future. Our salvation remains in the hands of others we are happy to chop just because they chose a Prophet who died for their sins or another Prophet who connected them with God while we remained loyal to the Prophet who raised his sword. Muslims are hopeless.

Benjamin Franklin said, “Admiration is the daughter of ignorance”. Maybe we should stop admiring ourselves and begin concentrating on dropping that sword.