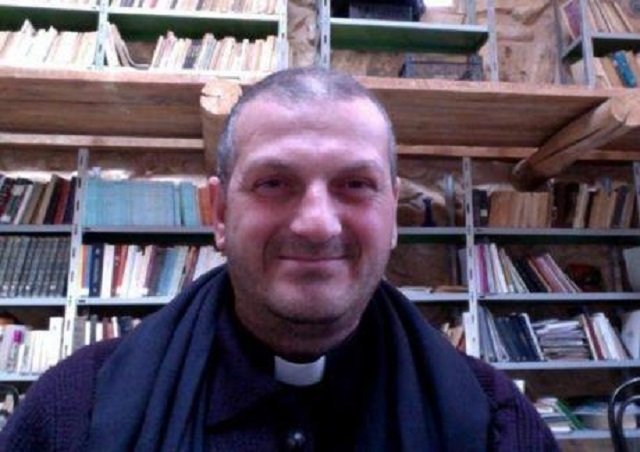 Was the abduction of Father Mourad a hoax?

A Syrian priest who was kidnapped in May in the central province of Homs is free and on Sunday conducted his first mass since his abduction, a church source said.

“Father (Jacques) Mourad is free. He is currently in the village of Zaydal,” about five kilometers (three miles) from the city of Homs, the source told AFP.

The priest of the Syriac Catholic Church “celebrated mass this morning in Zaydal,” the source added, without providing details on how he gained his freedom, citing security reasons.

Mourad was abducted from the town of Al-Qaryatain in May by unknown gunmen as the Islamic State group overran the nearby city of Palmyra.

Was the abduction of Father Mourad a hoax? Would the Assad regime not want him to disclose information about his abductors to protect from future abductions and to deprecate ISIS further? Who would miss such a golden propaganda?

At TFS, we believe the whole abduction thing was a hoax to pin the blame on Daesh (ISIS) to steer world public opinion in favor of the psychopath Baschar al-Assad. More than likely, Father Mourad spent the last few months in some monastery on the Mediterranean.

Now that Assad feels secure and the world demonizes his Daesh (ISIS) creation more than it demonizes him, he released Father Mourad to go back to pretend Daesh abducted him.

If you think Assad is incapable of such feat, you are an awe-inspiring, grand fool.

Obama caves on Syria, does nothing to help innocent civilians
Saudi fangs are out
Promoting Democracy in Syria: Options for U.S. Policy
Opinions 1017 Syrian Revolution 1335