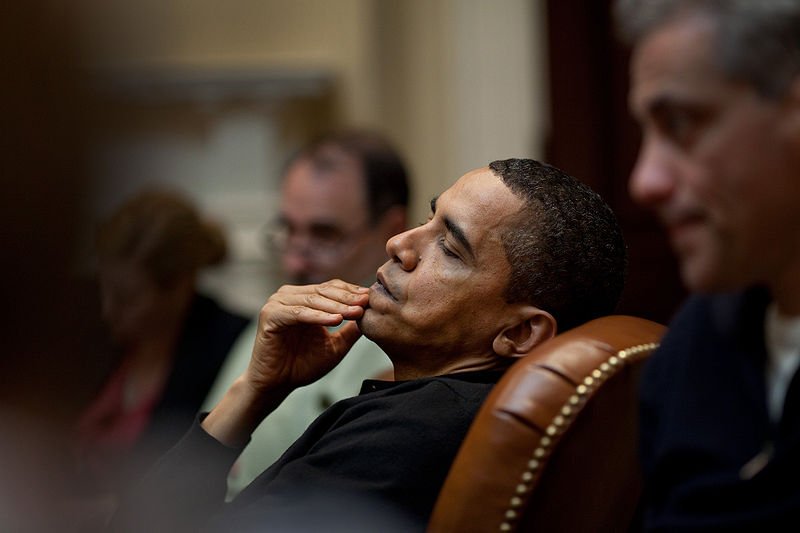 November 16, 2015 6:50 pm 0
Over Perfuming Obama Foreign Policy
The head of the snake
The get-to-the-bottom president

President Obama on Sunday promised to “redouble” U.S. efforts against Islamic State, which shows he isn’t deaf to the political impact of Friday’s murderous assault in Paris. But why should anyone believe him? After years of dismissing the rising terror threat, Mr. Obama needs an epiphany if he doesn’t want to be remembered as the President who allowed radical Islam to spread and prosper.

“It is an act of war that was waged by a terrorist army, a jihadist army, by Daesh [the Arab name for Islamic State], against France,” said French President François Hollande on Saturday, in words that met the moment. Contrast that to Mr. Obama, who on Friday morning told ABC News that “we have contained” Islamic State. Some are saying Mr. Obama is guilty of bad timing, but the truth is worse: The remark is what he believes, or at least what he has wanted Americans to believe.

The Paris massacre should mark the end of that self-deception. Jimmy Carter shed his illusions about the Soviet Union after its invasion of Afghanistan in 1979, and Mr. Obama needs a comparable rendezvous with reality. This will be harder for Mr. Obama, a man of great ideological vanity, but perhaps the prospect of defeat for his party in 2016 will force him to see the world more clearly.

For seven years Mr. Obama has used the unpopularity of the Iraq war as a shield for his retreat from antiterror leadership and the Middle East. His periodic drone strikes and his most notable security success, the Osama bin Laden raid, obscured the jihadist danger growing in the wake of America’s departure from Iraq and abdication in Syria.

Mr. Obama also deposed Moammar Gadhafi in Libya but then did almost nothing to help Libyans restore order. Americans saw a glimpse of the gathering storm in the terror attack on the U.S. consulate in Benghazi, but the White House blamed it on an obscure video.

Now Americans can see clearly the spreading infection from Islamic State and a resurgent al Qaeda. It isn’t merely a regional threat, as Mr. Obama once claimed. Its offshoots have spread into North Africa across the Middle East to Afghanistan. The civil war in Syria has spawned a refugee crisis that has descended on Europe and may have provided cover for at least one of the Paris jihadists.

Islamic State also isn’t the “jayvee” terror team, as Mr. Obama once claimed. Western intelligence believes its sympathizers in Sinai took down a Russian airliner. Its bombs explode day after day against civilian targets, this past week in Beirut and a Christian convent in Iraq.

The Paris attack is in some ways even more alarming than 9/11. Airplane hijackings have largely been stopped through enhanced security. Paris suggests that Islamic State has embarked on a strategy of urban unconventional warfare wherever it is able across the West. And it is far harder to track and prevent suicidal jihadists with assault rifles and grenades who want to blow up a restaurant district or concert hall.

France has been the target three times this year, counting the attack on a train foiled by three Americans, but America’s day is coming. In May FBI Director James Comey said there are “thousands” inside the U.S. who are absorbing Islamic State propaganda on the Internet.

The question now is what America’s President is going to do to prevent more Paris-like carnage, including attacks on U.S. soil. He can start by taking the political restraints off the U.S. military’s campaign against Islamic State. Turkey and the Sunni Arabs haven’t committed more to the fight because they don’t believe Mr. Obama is committed. France launched air strikes against the Islamic State stronghold of Raqqa on Sunday, but the U.S. should have been hitting those targets long ago.

Mr. Obama should order the Pentagon to roll back Islamic State from all of its territory in Iraq and Syria as rapidly as possible, which means months not years. Kurds and Sunni Arabs will provide most of the fighters if the U.S. supplies the firepower, intelligence and political leadership.

This ought to include taking up the Turks and Jordan on their desire for safe zones in Syria to protect Sunnis who are fighting the Bashar Assad regime but aren’t radical jihadists. Iran and Russia will not stand in the way of a determined U.S.-led coalition that includes France and the Sunni Arabs.

A similar policy reversal will be needed at home. From his refusal to speak clearly about the Islamist nature of the threat to his looming decision to close Guantanamo, Mr. Obama’s every instinct has been to suggest that America will be safer if we stop provoking jihadists and treat them as common criminals. Paris shows how mistaken that is.

Mr. Obama would send an important signal if he’d declare that Guantanamo will not be closed on his watch, and that U.S. surveillance will increase at home and abroad. It’s hard to know how much Mr. Obama has impaired U.S. intelligence collection since the Snowden theft, but the President should repair the damage because any terror attack will be his responsibility.

The Paris massacre means that the terror debate will also move to the forefront of the presidential campaign. In Saturday night’s Democratic debate, Hillary Clinton tried to edge away from Mr. Obama’s policies by saying that Islamic State must be “defeated” not merely “contained.” But her policy prescriptions are still to lead from behind, and she was an architect of the Libyan debacle.

As for the Republicans, Rand Paul’s already small chance at the nomination has now vanished. Whatever his contributions on economics, his libertarian foreign-policy instincts are too similar to President Obama’s. GOP voters will increasingly look to sort the other candidates by their experience and judgment, not merely tough talk. The election should be a referendum on keeping America safe.