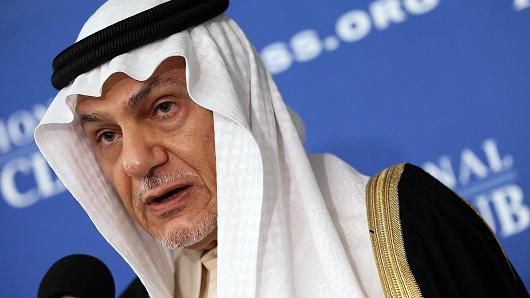 US should stop Assad not ISIS: Saudi prince

January 22, 2015 10:28 pm 0
The Naked Foreign Policy of Barack Obama
Assad behind killing James Foley
Why Iran is standing by its weakened ally Syria

U.S. policymakers should concentrate on eliminating the threat posed by Syrian President Bashar al-Assad instead of Islamic State militants in Iraq and Syria, according to an influential member of the Saudi Arabian royal family.

Prince Turki bin Faisal Al Saud told CNBC at the World Economic Forum in Davos that the reason why Islamic State exists is because of what’s happening in Syria and has called on U.S. authorities including the government, the Central Intelligence Agency and the military to act.

“They are all aware of what needs to be done,” he said. “It needs the political will.”

The prince, who is a former intelligence chief in Saudi Arabia and ambassador to the U.S., said that the United States is currently “leaving Assad to continue his murderous campaign.”

President Bashar al-Assad’s regime was accused of using chemical weapons against civilians in 2013 but the U.K. rejected the use of military action in Syria. The U.S. has also been reluctant to intervene in Syria despite U.S. President Barack Obama initially threatening missile strikes.

Instead, the U.S. turned its attention to the Islamic State which has taken control of parts of both Iraq and Syria. Last week, the U.S. – along with its allies – continued airstrikes against the terrorist organization, with the Combined Joint Task Force saying that 29 airstrikes had been conducted in a 24-hour period, according to Reuters.

Prince Turki likened the Islamic State to the Mafia, saying that it was “more criminal than they are religious.” His own anecdotal evidence suggested to him that the group’s members were more concerned with “robbing” and “looting,” with many only joining the organization for the money.

He agreed that the region needed to create more opportunities for young people and suggested a multi-pronged attack of better education, better economies and a better family unit would help diminish the threat of these groups.

In a wide-ranging interview, Prince Turki also stated his belief that giving Crimea back to the Tatars would solve the current issues in the region. The Tatars are a Turkic ethnic group who make up around 12 percent of the Crimean population, according to a 2001 census.

Russia decided to annex Crimea in March 2014 after a change of government in Ukraine gave Kiev a pro-European Union leader. In the eastern part of Ukraine, conflicts between government forces and pro-Moscow rebels are still ongoing and Crimea is still in the hands of Russian leadership.

“Nobody talks about them,” he said. “Bring the Tatars back…you’ll solve it,” he added.

He went on to suggest that the same could be said of the situation between Israel and Palestine, adding that an Arab Peace Initiative could look at the possibility of giving Palestinians land that is rightfully theirs.

US should stop Assad not ISIS: Saudi prince