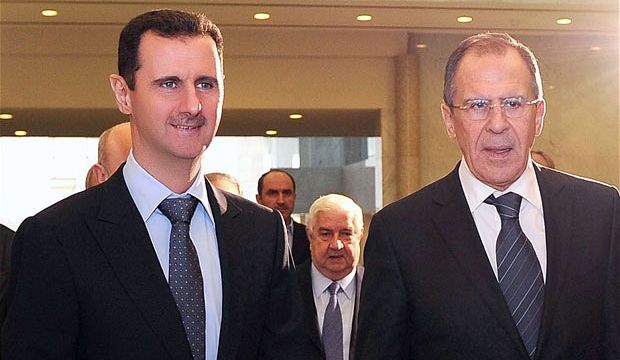 June 1, 2015 10:13 am 0
America No Longer Matters, Thanks to Barack Obama
America Surrendered to Iran
The Communist Comrades Have Screwed America Royally

A good example of the latter is when Israel ignores some obvious threat, which only means it has a third-party commitment, able to control that threat, that it will not menace its interests.

In the latter “where-is-the-news” category falls the possibility of US-Russian-Saudi ongoing secret negotiations over Syria that should be taking place during this period after Arab diplomatic sources leaked that the Russians are abandoning Assad and his regime. Such leak by the Arab diplomatic sources could not happen in a vacuum. Russia has yet to deny it.

Behind this leak is a big banner that reads, “Russia Intends to Protect Its Interest in Syria”.

Putin is not about to abandon Syria all together if he is abandoning Assad; even though Russia may be moving its warm water port naval fleet now stationed in Tartus to Cyprus and may be looking for some relief from the sanctions and Saudi Arabia’s intentional oil production levels keeping oil prices artificially low (Time to buy some oil options for the investment savvy among you). .

Assuming there are US-Russian-Saudi ongoing secret negotiations over Syria taking place now as we speak, how does that affect Iran? Are the Russians also telling Iran it could no longer have a say in Syria or are the Russians protecting Iranian interests by proxy? There has been no official or unofficial response from Iran over the last two days to the Arab leak.

There are obvious benefits to this US-Russian-Saudi unusual alliance. For one, all parties see ISIS as their enemy, which means ISIS is in trouble. This is the obvious part.

What we are clueless about is the kind of government that will emerge in Syria from these US-Russian-Saudi ongoing secret negotiations if they are taking place at all. Will it by an Assad regime hybrid with the opposition playing a role or will it simply aim to maintain the civil institutions intact by maintaining the same bureaucracy?

We will only know if news about a possible US-Russian-Saudi ongoing secret negotiations over Syria are revealed.

Russia aims to protect the Orthodox Christian community, and this one demand cannot be met if Syria is permitted to be ruled by a Muslim extremist group like the Muslim Brotherhood. Alternatively, the goals of the Syrian people cannot be met as long as Assad and the 150 criminals around him are not prosecuted for crimes against humanity.

It will be a major mistake for Western powers and Saudi Arabia to assume the people of Syria will simply accept a final deal without criminalizing Assad and his entourage. This is how terror organizations like ISIS find their spark and the momentum for their public support.

Even when US-Russian-Saudi ongoing secret negotiations over Syria, if taking place, are successful and all parties agree in principle to a formula that meets the minimum security requirements of Syrians and each participating country, how will the Islamists be defeated and who is on-board to defeat them?

As Douglas Horton once said, “The art of simplicity is a puzzle of complexity”. Syria needs a simple solution that meets the needs of every religious faith, but the puzzle to reach this goal remains a complex endeavor.