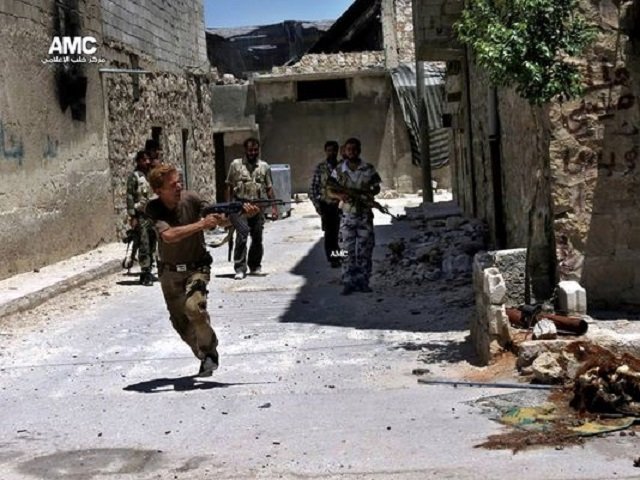 July 11, 2013 9:36 am 0
Optimistic Facts and Predictions About the Arab Revolutions
How the Media’s Focus on Kobani Obscures the War in Syria
Are We on the Brink of Assad’s Final Days?

TSF Note: in “US arms haven’t reached Syrian rebels” article, we are reminded of Napoleon who once said “Never ascribe to malice that which is adequately explained by incompetence.”

A month after the White House announced it was boosting aid to the Syrian opposition, rebel leaders say they have seen little or no evidence of U.S.-supplied arms entering the country and momentum on the ground is shifting toward the regime, analysts say.

It is not clear what is causing the delay. Administration officials have said they will vet rebel groups to ensure that weapons don’t fall into the hands of al-Qaeda-affiliated opposition forces.

Meanwhile, forces loyal to  [psychopath] Bashar Assadare placing pressure on rebels in Homs, a strategic city that lays astride supply lines into Damascus from the Mediterranean.

If regime forces can consolidate their hold on Syria’s third-largest city it “leaves the regime’s supply lines uncontested,” said Elizabeth O’Bagy, an analyst with the Institute of the Study of War.

The developments come after regime forces backed by Hezbollah guerrilla fighters pushed rebels out of Qasair near the border of Lebanon.

Last month the White House announced it would boost direct support to both civilian and military wings of the opposition in Syria after determining that Assad’s regime has used chemical weapons.

Officials said privately that the support would include arms since Assad’s use of chemical weapons meant it had crossed a “red line.”

Rebel leaders have complained that they haven’t received American-supplied weapons yet, O’Bagy said.

“The program is both underwhelming and is yet to get underway,” said Michael Rubin, an analyst at the American Enterprise Institute.

The administration has said its aid is designed to attempt to bring together and coordinate the hundreds of rebel groups fighting Assad’s regime. Analysts say this lack of coordination and training hurts the effectiveness of rebel forces.

The White House has not commented directly on what may be causing the delay but has said it is committed to providing support to the rebels.

“We were not bluffing,” White House spokesman Jay Carney said this week. “The president was very serious.”

Meanwhile, Assad’s army has received help from hardened Hezbollah guerrilla fighters and appears to be learning from past mistakes, analysts say.

“There is a growing body of evidence that Syrians are getting better at combined arms,” said Jeremy Binnie, an editor at IHS Jane’s Defence Weekly, referring to the coordinated use of ground troops and support from aircraft and artillery. The Syrian army is starting to use its infantry along with tanks, Binnie said.

Syria’s armed forces are also establishing local militias that can be used to hold regions that have been cleared so that its army is free to move elsewhere, Binnie said.

Even if U.S. supplied weapons do begin flowing to rebels analysts doubt they will represent a game-changer. Rebel leaders have said they need anti-tank and anti-aircraft missiles to neutralize Assad’s superior firepower. The United States has been reluctant to provide them for fear they would end up in the wrong hands.

Recently, rebels forces appear to have received Chinese and Russian made missile systems. It is not clear how they acquired them but Saudi Arabia and Qatar are both providing supplies to the rebels.

Khalid Saleh, a spokesman for the opposition, declined to comment publicly about U.S. support but said rebels need anti-aircraft and anti-armor systems. He said rebels have been using a Russian-made guided missile system against Assad’s armor.

“It would only help prolong the conflict it,” O’Bagy said. “It doesn’t help end it.”