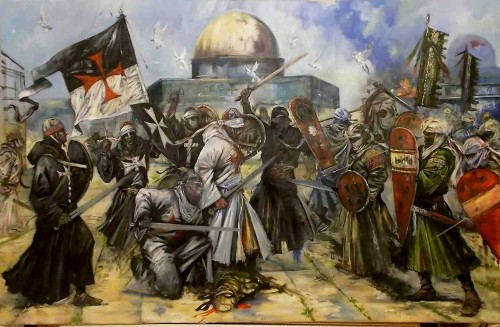 Until Khamenei Tastes His Own Violence

The United States will never be at peace until Khamenei tastes his own violence. If it’s not nuclear weapons the terrorist Iranian regime in Tehran is pursuing, it is expansionism. If it is not their violent proxies fighting Khamenei’s wars to threaten our interests, it is occupation of Arab lands. Furthermore, if it is not long-range missiles Khamenei is manufacturing to one day annihilate Israel, it is taking over Arab governments.

Anyway you slice it, the goals of the regime in Tehran is to, one day, attack the United States at home. We, and our allies, are a threat standing in its Islamic expansionist Moorish ways. Sooner or later, the clash is going to happen. One that would have to answer the question most on our minds: Are we willing to forcefully remove the Iranian regime from power to stop future home attacks?

The risks in waiting out to answer that question are immense. Iran trains and equips more terror groups. The Mullahs plan and execute strategies to run over Arab countries to occupy and enslave. Their nuclear building program is on steroids. Meanwhile, Israel is a sitting duck in the face of our exposure to risk managed by risk-averse war rejectionists and cowardly non-interventionists.

Two terms of Barack Obama in addition to one by a pull-our-troops-out Donald Trump has emboldened Iran. Khamenei really believes he can defeat the United States. We, alone, planted this idea in his head. The supreme terrorist thinks the US is incapable of waging a win-for-all war against his defunct regime. Sad, isn’t it? Absolutely pathetic on our part to have seeded, through our own inaction, the notion of our own defeat in the eyes of our enemies.

“The Iran Deal bundled all of our interests, prestige, and power into one convenient surrender document. This was our own Treaty of Versailles and we played the role of Germany in the deal.”

The attack against the Iraqi militias Iran backs was a good decision. But look at the consequences. Iran breached our embassy compound in Baghdad as a reminder of what happened in Tehran in 1979. Khamenei is taunting us, and unless he tastes his own violence, we will always be on the defensive.

Until Khamenei smells the gunpowder of our cruise missiles, the United States is at the mercy of his violence in the region. We must take the fight to his own backyard. To Iran itself to reset the notion, in Khamenei’s mind, that he can defeat us. Until then, it’s tit-for-tat and our own hesitation to strike Khamenei in Tehran amplifies our own weakness.

HOW PREPARED IS IRAN?

Is it the electric grid supplying its military command centers with power? Is it the computers in control of missile launching? Could it be some new technology we developed, or means by which we can paralyze a terrorist third-world country? Or maybe it’s all about our own military commanders whose legacies hang in the balance.

They all envy General Norman Schwarzkopf leading us into total victory in Desert Storm. But they also remember what happened to the military generals executing the Iraq War. Facing Iran is a risky proposition in their own minds, which runs contrary to our interests. Because of their reluctant attitude, none would provide the right advice to the commander-in-chief.

The same is true of our presidents. The whole Iran Deal was based on two notions, one of which remits the keys to the region to Iran in order never to wage another war in the Middle East. The Iran Deal bundled all of our interests, prestige, and power into one convenient surrender document. This was our own Treaty of Versailles and we played the role of Germany in the deal.

Until we take the fight to Tehran, the United States is easy picking. Just storm the embassy in Baghdad for all kind of imagery to rush into our jittery brains. Unless, of course, we man up and take care of the terror regime in Tehran once and for all.

This is not the Iraq War, nor is it 2003. Our technologies and superior weaponry can remotely cause Tehran to fall.

Unfortunately, it is the courage in our military commanders and the will in our politicians that we lack.

Until Khamenei Tastes His Own Violence