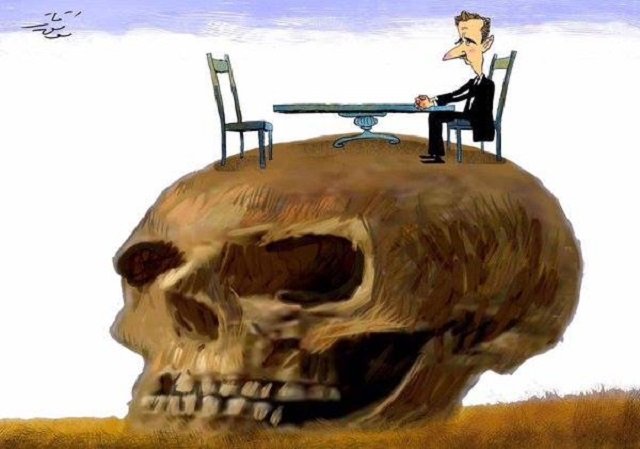 While the UN ignored the demands by the Syrian opposition to seek to lift the sieges against the towns of Madaya and Darrya as pre-conditions before any negotiations begin, the United Nations on Tuesday sent out invitations to new Syria peace talks in Geneva this week, as leading opposition representatives debated whether to attend. The UN immorality on display in Syria is unprecedented. Everyone is pursuing his Nobel Peace Prize at the expense of the Syrian people.

The United Nations Syria envoy Staffan de Mistura, considered by many to be an incompetent diplomat, said it had issued invitations to the talks, which are scheduled to begin on Friday, but without saying who had been invited. The Syrian opposition is under pressure not to attend by those fighting in Syria if you gauge the social media and the use of #Don’tGoToGeneva Arabic equivalent being used.

The talks have already been delayed from a scheduled start on Monday over who will represent the opposition.

The High Negotiations Committee, a body representing key opposition groups and factions, insists it should be the sole opposition delegation.

However, several Assad agents, posing as opposition figures, and who do not belong to the body told AFP on Tuesday they had been invited to the talks. Russia insisted on inviting these Assad agents and spies to split and divide the opposition and show the world the Syrian opposition is unfit to govern.

The High Negotiations Committee is walking into a Russian trap aimed at driving a stake into the heart of what is called a Syrian opposition.

A source close to the meeting in Riyadh confirmed the body had received invitations to Geneva, but said discussion over whether to participate was ongoing.

“The response will be a request for clarifications and not an acceptance or rejection,” he told AFP, adding that the body wanted to know who else had been invited and under what terms, as well as what would be discussed.