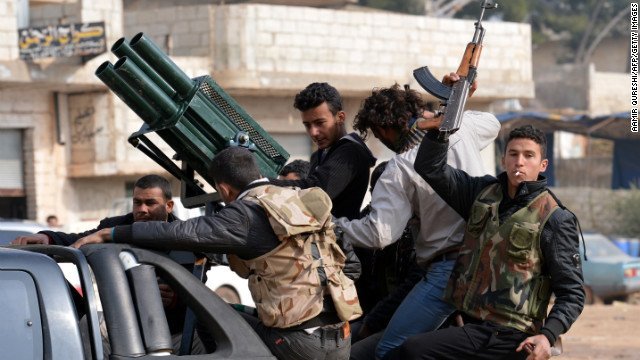 U.S. allies in Middle East ramping up support for rebel forces in Syria

April 30, 2015 10:00 am 0
Western Countries Are Missing the Big Picture in Syria
Assad has to go. No ifs and no buts. Period.
Syrian Rebels Routing Assad Forces

U.S. allies in the Middle East have ramped up their support for rebels fighting against Syrian forces in recent months, potentially widening a gulf over strategy between the Obama administration and its regional partners.

The partners have grown increasingly impatient with the administration’s slow march toward training and equipping a viable Syrian opposition force, and its insistence that those fighters focus on the Islamic State, according to officials in the region. To facilitate their primary goal of removing President Bashar al-Assad from power, the allies have moved ahead with their own plans.

The delivery of additional weapons and financial aid from Saudi Arabia, Turkey and Qatar have facilitated recent advances against government forces in northwest Syria by the Army of Conquest, a newly formed umbrella of diverse rebel groups, including al-Qaeda’s affiliate and other Islamist groups, along with “moderate” fighters.

Regional officials insist that the aid, including U.S.-made TOW missiles, is not going to the Islamists. Instead, they said, it is enabling moderates to enhance their stature among opposition fighters after years of being outgunned and out-financed by more militant groups.

The initiative comes amid a growing sense in the region that the United States is preoccupied with its nuclear negotiations with Iran and the fight against the Islamic State in Iraq. In the meantime, regional officials and experts said, the Obama administration has failed to come up with a comprehensive strategy that addresses the more immediate concerns of its allies.

This article is based on interviews with officials from the administration and U.S. partner nations in the region, most of whom spoke on the condition of anonymity to discuss sensitive coalition issues.

Early this month, at a coalition meeting hosted by Jordan, administration officials were bombarded with questions about U.S. leadership of the 60-nation group, and how it would address the global expansion of the Islamic State.

Beyond the growing number of militant recruits in Europe, extremist groups in Libya, Afghanistan, Nigeria and the Sinai have declared their allegiance to the Islamic State, which has also reportedly put down roots in Southeast Asia.

But what many view as a leadership vacuum is most acutely felt in the case of Syria. In response, Saudi Arabia and Turkey, with an assist from Qatar, recently ended a long estrangement to address their shared concern over the lagging fight against Assad.

The new approach could undermine three years of U.S. Syria policy focused on securing a negotiated settlement to the war by putting enough pressure on Assad that he feels compelled to make compromises, but not enough to score an outright opposition victory that might result in chaos and cause Syria to collapse even further.

Most of the moderate groups chosen to receive support have been eliminated or eclipsed by extremists, however, and the negotiation process begun years ago in Geneva has languished.

With al-Qaeda affiliate Jabhat al-Nusra often playing a decisive role, rebel forces have ousted Assad’s military from the northwestern city of Idlib and from a series of towns and military garrisons in a westward push toward the Mediterranean. Together with signs of disintegration in Assad’s leadership structure, the advances have led many to believe the government is on the brink of falling.

U.S. officials express doubts, noting that the balance of forces has repeatedly changed throughout Syria’s four-year civil war. “It’s clear the regime has suffered serious setbacks,” a senior administration official said. But “this is a conflict that ebbs and flows.”

Just a few months ago, government forces were seen as ascending, the official said, and “people who now think [the regime] is on the verge of collapse may be equally wrong.”

But the push by U.S. allies to increase support for opposition forces has sparked a swirl of speculation among Syria experts that the administration risks becoming irrelevant if it does not take charge or at least increase its participation in the fight.

Some find it hard to believe the United States is not involved in the new push. “The initiative is being driven by allied Arab states, with Turkey, to push for a decisive military resolution,” said Oubai Shahbandar, formerly with the Syrian national coalition, which claims political leadership over the moderate opposition. But, he said, “the U.S. is likely playing a role in the background.”

Others believe that the partners have moved far ahead of U.S. policy, trying to create a reality on the ground that the administration will have to accept and support.

“If the Turks and Qataris and Saudis increase their support to the Syrian rebels, I don’t think the Americans will be in a position to say, you are wrong,” said Jamal Khashoggi, a prominent Saudi commentator with close ties to the monarchy.

Turkish Foreign Minister Mevlut Cavusoglu, in Washington last week for consultations with the administration, said in an interview that his government agrees that Syria will eventually need a negotiated political transition. “Fighting Daesh is also a priority,” he said, using an acronym that refers to the Islamic State.

But, he said, “the main problem overall is that we still don’t have a clear, comprehensive strategy” to address the group’s expansion in Syria and Iraq while countering Assad, which he described as “the root cause” of the problem.

Turkey, Saudi Arabia and Qatar all support the establishment of a “safe zone” for the moderate rebels and Syrian refugees in northern Syria, protected by U.S. and coalition air power. The administration, citing disagreements with Turkey over some points in the plan, has so far resisted.

While negotiations over a protected zone continue, “what we have always argued for, and the Turks have argued, is that we need to improve the flow of weapons into the north,” an official in one of the participating governments said. “We say [to Turkey] .?.?. let’s have a commitment in terms of what you’re prepared to do and what we’re prepared to do with you. Then we can go back to the coalition partners and say okay, here’s a plan.”

In addition to controlling the pace of the fight against Assad, the administration has insisted that the flow of weapons must be coordinated among the allies to ensure that none ends up in the hands of militant groups such as Jabhat al-Nusra.

For the past year, all coalition weapons shipments have been coordinated through regional operations centers in Turkey, Jordan and the Saudi capital, Riyadh. There, military and intelligence officials from all involved governments separate the often-overlapping rebel groups on the ground into categories of green (weapons allowed), red (no weapons allowed) and yellow (more study needed).

But all involved acknowledge that such neat separations are difficult on the battlefield, where moderate units and individual fighters have increasingly gravitated toward alliances or outright melding with better armed and funded groups such as al-Nusra.

“Are we concerned that Nusra has taken the lead” in much of the combat in northern Syria? asked the senior administration official. “Yes.”

“We know because of the realities of the battlefield, where the more moderate opposition feels compelled to coexist” with radical groups, that such things happen, the administration official said. “We’re not blind to the fact that it is to some extent inevitable” that U.S. weapons will end up in the hands of militants.

But “it would be impossible for us to either turn a blind eye, let alone to participate in any effort to strengthen” extremist groups, the official said. “It’s not something we would refrain from raising with our partners.”

Many now argue, however, that the United States needs to take more risks in arming the rebels if it wants to stay relevant.

“The Turks, the Saudis and the Qataris are trying to shake it up,” said Robert Ford, a former U.S. ambassador to Syria. “If you don’t want them to increase arms shipments, what is your solution? The answer can’t be ‘We’re going to bomb Daesh.’ ”

U.S. allies in Middle East ramping up support for rebel forces in Syria

One Assad Army Base At a Time
Assad has to go. No ifs and no buts. Period.
Assad Losses Piling Up
Syria News 1210 Syrian Revolution 1352