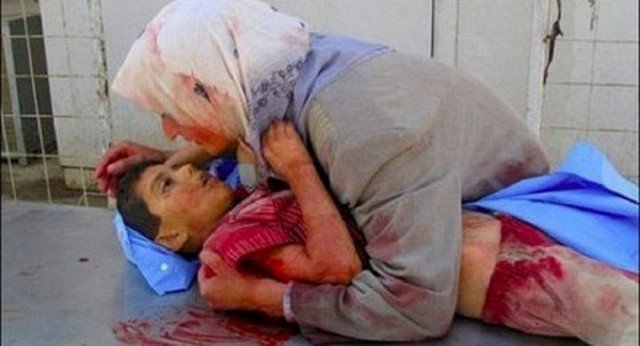 December 17, 2015 7:03 am 0
The Thomas Affair: A Letter to Wayne State University
Of Tyrants and Gravity
How Assad Uses the Syrian Fleet?

Ending the crisis in Syria should not hinge on deciding the fate of the psychopath Baschar al-Assad, U.N. Secretary-General Ban Ki-moon said Wednesday. Apparently, the U.N. mission statement is to empower mass murderers and tyrants. Secretary Ban Ki-moon should spend this Christmas looking at the 55,000 pictures of the people Assad killed and tortured.

Ahead of a new round of international talks on Syria in New York on Friday, Ban said disagreements on Assad’s future should not stand in the way of advancing prospects for peace.

“It is unacceptable that the whole Syrian crisis and the solution to the crisis has to be dependent on the fate of one man,” Ban told a news conference.

“That is unacceptable,” he repeated.

Syrians disagree when that man has gassed women and children in their sleep.

Foreign ministers from 17 countries including key players Russia, Iran, Saudi Arabia and the United States are meeting in New York on Friday for a third round of talks on ending Syria’s nearly five-year war.

At the last round, the so-called International Syria Support Group (ISSG) agreed to U.N.-led peace talks and a ceasefire in January, and to put in motion a political transition within six months, leading to elections and a new constitution in 18 months.

Preparations for the talks and ceasefire are moving forward, but U.S. Ambassador Samantha Power said “the gaps are very real” over what role, if any, Assad will play in the new transitional government.

“We remain absolutely convinced that for as long as  [Psychopath] Assad is in power, it is going to be extremely challenging to turn the country’s attention and the various armed groups’ attention to fighting terrorism and to fighting ISIL.”

Inadvertently, Ms. Power failed to mention that Syrians are determined to remove Assad from power. They will not stop fighting until they reach that goal. Even if they lose support from countries backing them today. The war has turned sectarian, and no one can stop it with 350 million angry Sunnis all willing to fund or fight.

The U.S. and its allies in the Gulf and in Europe are pushing for a transition that provides for Assad’s exit from power at some point, but Russia and Iran oppose that stance.

More than 300,000 people have died since Syria’s conflict erupted in March 2011, and some 12 million more have fled their homes.

Of Tyrants and Gravity
The Thomas Affair: A Letter to Wayne State University
How Assad Uses the Syrian Fleet?
Western Appeasement 481