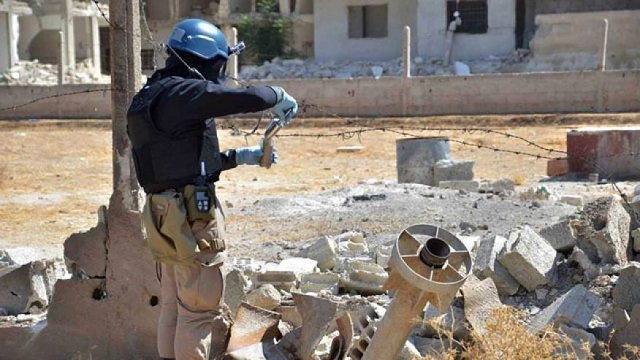 September 29, 2013 4:30 am 0
Rebels Shell Damascus Resulting in Civilian Deaths
The Significance of the Battle for Aleppo
Even Democrats are Critical of Obama

As the pace of efforts to scrutinize Syria’s chemical weapons stockpiles quickens, United Nations inspectors said on Friday that they were investigating reports that the weapons were used seven times in Syria, including three after an attack on Aug. 21 on the outskirts of Damascus, the Syrian capital, that set off an international crisis.

The disclosure, which came in a statement from the United Nations in Damascus that was quoted in news reports, came as the Organization for the Prohibition of Chemical Weapons, the group in The Hague that oversees the international treaty banning them, planned a meeting late Friday to approve a separate schedule for inspections of chemical weapons storage and production sites. Syria applied to join the treaty this month.

A joint proposal by the United States and Russia to be put before the organization’s executive council on Friday calls for the completion of inspections and the destruction of “production and mixing/filling equipment” by November,according to a text on the organization’s Web site.

An official at the Organization for the Prohibition of Chemical Weapons said that, if the meeting of the 41-nation Executive Council approves the plan to deploy inspectors in Syria at its meeting later on Friday, a first team of experts could leave for Syria on Monday and plan to arrive there on Tuesday.

The official, who declined to discuss the composition of the team, spoke on the condition of anonymity because the plan had not yet been approved.

In a breakthrough accord on Thursday, the five permanent members of the United Nations Security Council, which include the United States and Russia, the Syrian government’s most powerful ally, agreed on a resolution that would require Syria to give up its chemical weapons, although there would be no automatic penalties if the Syrians failed to comply. More than 100,000 people have died in Syria’s civil war, now in its third year.

The inspections foreseen by the Organization for the Prohibition of Chemical Weapons are separate from those under way by United Nations experts who arrived in Damascus on Wednesday to follow up on claims of battlefield attacks using toxic munitions.

According to a statement in Damascus on Friday, Reuters said, the experts who are already in Syria plan to conclude their examinations of the sites of seven purported chemical weapons attacks by Monday.

Two of the attacks took place in Bahariyeh and Jobar, to the east of central Damascus, on Aug. 22 and Aug. 24, and a third southwest of the capital on Aug. 25, the statement said.

It was the first indication that such unconventional weapons were used after the international outcry provoked by the Aug. 21 attack.

Earlier United Nations inspections within days of the attack on Aug. 21 discovered the use of sarin, a deadly nerve gas. The United States and its allies blamed the Syrian authorities for the attack, which killed hundreds of civilians, but Bashar al-Assad has accused the rebels fighting to overthrow him of deploying chemical weapons.