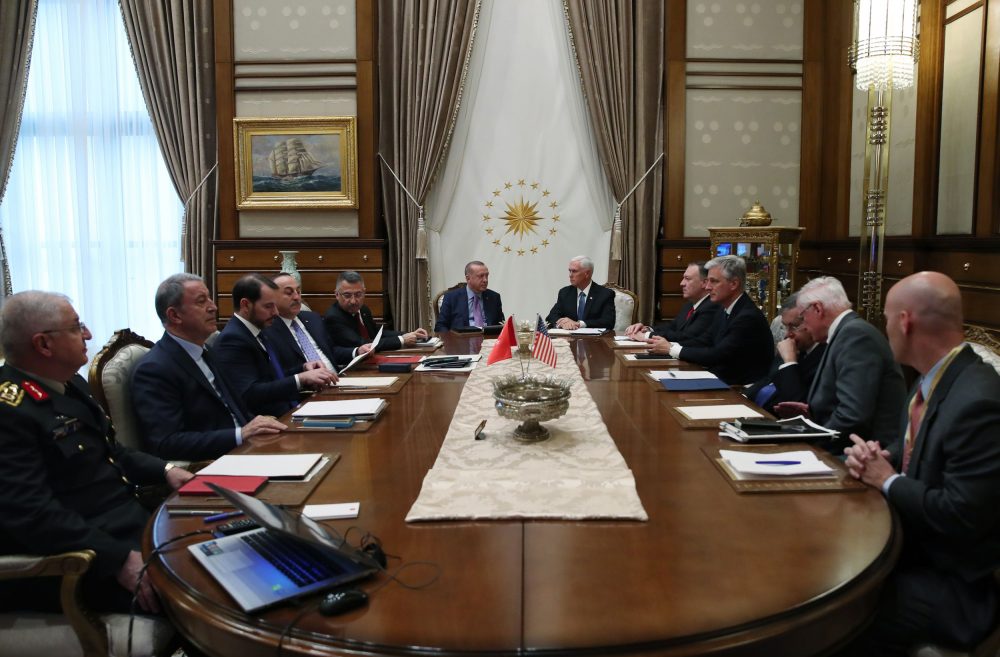 Turkey wins a Kurdish retreat as it agreed on Thursday to pause its offensive in Syria for five days to let Kurdish forces withdraw from a “safe zone” Ankara had sought to capture. The Trump administration took credit for the deal and Ankara claimed victorious.

Turkish plans to settle up to 2 million Syrian refugees, in lands taken from them by the Kurds, seems undisturbed.

U.S. Vice President Mike Pence announced the terms after talks in Ankara with Turkey’s President Tayyip Erdogan. President Trump hailed it by saying it would save “millions of lives”.

But if implemented it would achieve all the main objectives Turkey announced when it launched its assault on Oct. 9. Mainly control of a strip of Syria more than 30 km deep, and the Kurds pulling back from lands they occupied recently to replace the ISIS occupation. Under what one might call “The liberator claims ownership of the liberated”.

SDF commander Mazloum Kobani told Ronahi TV the group would accept the ceasefire agreement with Turkey in northern Syria. He added that the agreement limits Turkey to the border areas running between the towns of Ras al-Ain and Tal Abyad. An area much smaller than what Turkey aims for.

Republican and Democratic senators accused Trump of having betrayed the Kurdish allies who were vital in fighting Islamic State militants, of brushing aside the humanitarian costs of Turkey’s invasion and of being outwitted by Ankara.

A joint U.S.-Turkish statement released after the talks said:

“The safe zone will be primarily enforced by the Turkish Armed Forces.

US SENATE TO ACT WITH SANCTIONS

U.S. senators who have criticized the Trump administration for failing to prevent the Turkish assault in the first place said they would press ahead with legislation to impose sanctions against Turkey despite the ceasefire announcement.

A Turkish official told Reuters that Ankara got “exactly what we wanted” from the talks with the United States. Turkish Foreign Minister Mevlut Cavusoglu described it as a pause, solely to allow the Kurdish fighters to withdraw.

Under the terms of the agreement, the Kurdish fighters would give up their heavy weapons, Cavusoglu said. Furthermore, Turkey would destroy all their positions. He declined to call the agreement a “ceasefire”, saying ceasefires take place between two legitimate sides. Turkey considers the Kurdish separatist fighters, who have a history of insurgency in eastern Turkey, a terrorist group.

When the terrorist elements completely leave the safe zone, we can stop the operation.

Pence said Washington had already been in contact with the Kurdish-led SDF. The Kurds agreed to withdraw and were already pulling out.

However, the Kurdish position was not clear. Speaking to Ronahi TV, SDF commander Kobani said the agreement is “just the beginning” and will not achieve Turkey’s goals.

Aldar Xelil, a leading Syrian Kurdish politician, told Al Arabiya television that the Kurds would abide by the ceasefire but would defend themselves.

Pence said that once the pause became permanent, Washington would go ahead with its own plans to withdraw its entire military force from northern Syria. There were no signs that U.S. forces had ceased their withdrawal, a U.S. official said.

Great news out of Turkey. News Conference shortly with @VP and @SecPompeo. Thank you to @RTErdogan. Millions of lives will be saved!

Pence told a news conference after more than four hours of talks at the presidential palace in Ankara:

The deal struck with Erdogan also provided for Turkey not to engage in military operations in the flashpoint Syrian border town of Kobani, Pence said. Cavusoglu said Turkey had given no commitments about Kobani.