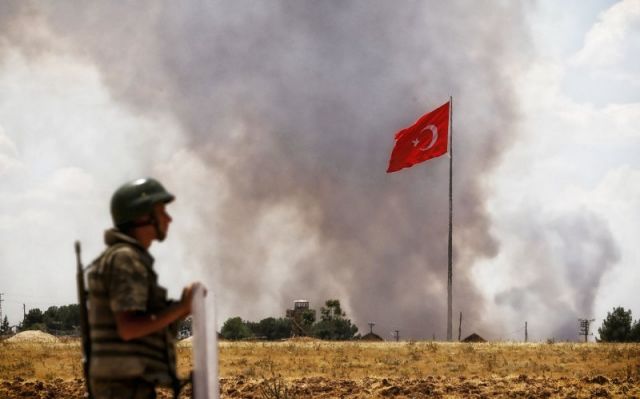 Turkey Plans to Send Troops Into Syria, Widening the War

The Turkish military is not enthusiastic and Washington may have its doubts, but President Erdogan appears determined to set up a buffer zone.

ISTANBUL—Turkey’s President Recep Tayyip Erdogan is planning a military intervention into northern Syria to prevent Syrian Kurds from forming their own state there, despite concerns among his own generals and possible criticism from Washington and other NATO allies, according to reports in both pro- and anti-government media.

In a speech last Friday, Erdogan vowed that Turkey would not accept a move by Syrian Kurds to set up their own state in Syria following gains by Kurdish fighters against the so-called Islamic State, or ISIS, in recent weeks. “I am saying this to the whole world: We will never allow the establishment of a state on our southern border in the north of Syria,” Erdogan said. “We will continue our fight in that respect whatever the cost may be.” He accused Syrian Kurds of ethnic cleansing in Syrian areas under their control.

Following the speech, several news outlets reported that the president and Prime Minister Ahmet Davutoglu had decided to send the Turkish army into Syria, a hugely significant move by NATO’s second biggest fighting force after the U.S. military.  Both the daily Yeni Safak, a mouthpiece of the government, and the newspaper Sozcu, which is among Erdogan’s fiercest critics, ran stories saying the Turkish Army had received orders to send soldiers over the border. Several other media had similar stories, all quoting unnamed sources in Ankara. There has been no official confirmation or denial by the government.

The government refused to comment on the reports. Foreign Minister Mevlut Cavusoglu said “the necessary statement” would be issued after a regular meeting of the National Security Council, which comprises the president, the government and military leaders, this Tuesday.

The reports said up to 18,000 soldiers would be deployed to take over and hold a strip of territory up to 30 kilometers deep and 100 kilometers long that currently is held by ISIS. It stretches from close to the Kurdish-controlled city of Kobani in the east to an area further west held by the pro-Western Free Syrian Army (FSA) and other rebel groups, beginning around the town of Mare. This “Mare Line,” as the press calls it, is to be secured with ground troops, artillery and air cover, the reports said. Yeni Safak reported preparations were due to be finalized by next Friday.

There has been speculation about a Turkish military intervention ever since the Syrian conflict began in 2011. Ankara has asked the United Nations and its Western allies to give the green light to create a buffer zone and a no-fly area inside Syria in order to prevent chaos along the Turkish border and to help refugees on Syrian soil before they cross over into Turkey. But the Turkish request has fallen on deaf ears.

The latest reports fit Erdogan’s statement on Friday and the government position regarding recent gains by Syrian Kurds against the Islamic State. The Syrian Kurdish party PYD and its armed wing YPG, affiliates of the Turkish-Kurdish rebel group PKK, have secured a long band of territory in northern Syria from the Syrian-Iraqi border in the east to Kobani.

Ankara is concerned that the Kurds will now turn their attention to the area west of Kobani and towards Mare to link up with the Kurdish area of Afrin, thereby connecting all Kurdish areas in Syria along the border with Turkey. Erdogan expects that the Syrian Kurds, whose advance against ISIS has been helped by airstrikes from the U.S.-led coalition, will go on to form their own state as Syria disintegrates after more than four years of war.

PYD leader Saleh Muslim denied that Syria’s Kurds intend to do this.

But Turkey’s leaders are not convinced that is true. The daily Hurriyet reported Erdogan and Davutoglu wanted to “kill two birds with one stone” with a military intervention along the Mare Line. One aim would be to drive ISIS away from the Turkish border, depriving the jihadists of their last foothold on the frontier and thereby cutting off supply lines. Such a move would tie in with the U.S. strategy to contain and weaken ISIS.

A second goal of the operation would be closer to Ankara’s own interests. The English-language Hurriyet Daily News quoted one source saying there was a need to  “prevent the PYD from taking full control over the Turkish-Syrian border,” and also to create a zone on Syrian territory rather than in Turkey to take in new waves of refugees.

But the military is reluctant, the reports said. Generals told the government that Turkish troops could come up against ISIS, Kurds and Syrian government troops and get drawn into the Syrian quagmire. Retaliation attacks by ISIS and Kurdish militants on Turkish territory are another concern.

Finally, the soldiers pointed to the international dimension. The military leadership told the government that the international community might get the impression that Turkey’s intervention was directed against Syria’s Kurds, the newspaper Haberturk reported.

Turkey’s NATO partners, some of whom have deployed troops operating Patriot missile defense units near the Syrian border to shield member country Turkey against possible attacks from Syria, are unlikely to be happy with a Turkish intervention.

Turkey’s pro-government press insisted there were no tensions between civilian and military leaders in Ankara. “If the government says ‘go,’ we will go in,” the pro-Erdogan daily Aksam wrote, attempting to sum up the military’s stance in a headline.

On Sunday, fighting broke out between ISIS troops and FSA units near the town of Azaz, close to the Turkish border crossing of Oncupinar. News reports said ISIS was trying to bring the Syrian side of the border crossing under its control. The area of the latest clashes lies within the “Mare Line” cited as the possible location of a Turkish incursion.

Turkey Plans to Send Troops Into Syria, Widening the War

UN urged to probe abuses by Syria’s Assad
That’s why they kill: Bachir of Sudan is Their Glass Ceiling
Americans are ignoring the greatest humanitarian crisis in decades
Syria 450