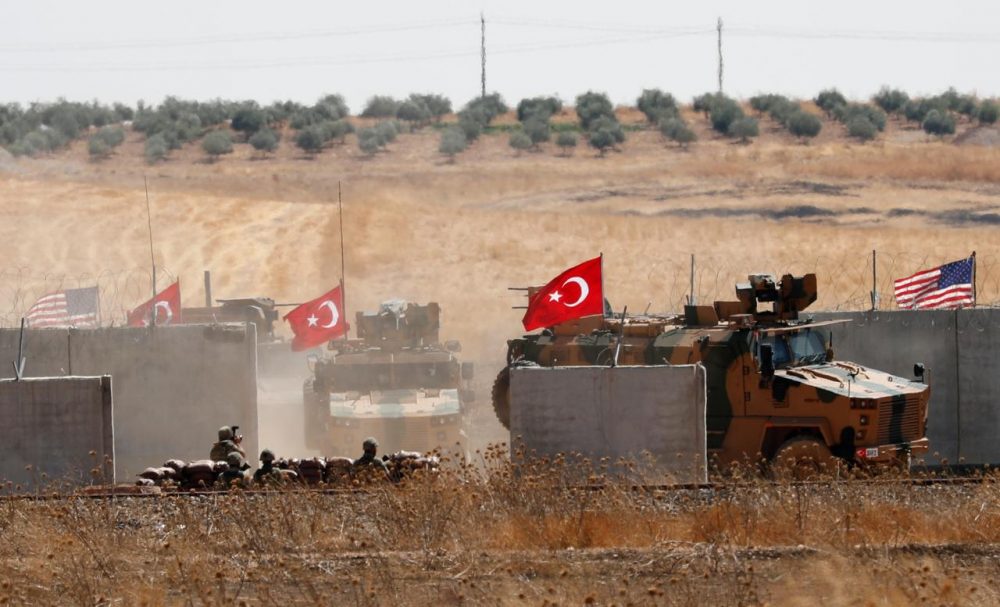 September 8, 2019 7:35 am 0
Trump Imposed Sanctions on Turkey
Turkey Begins Assault on Kurdish Forces inside Syria
Syrian Oil Fields are off Limits to the Trifecta Terrorists

Armed Turkish military vehicles crossed into Syria on Sunday and headed southwest with U.S. counterparts to begin planned joint patrols to establish a “safe zone” along a border region mainly controlled by Kurdish forces. Hey Assad, Turkey just established a northern Golan Heights right under your nose. Assad, or we yield the country.

Vehicles with Turkish flags joined those in Syria with U.S. flags. Both patrolled some 15 kilometers east of the Turkish border town of Akcakale, near Syria’s Tel Abyad. Two military helicopters hovered overhead.

The region east of the Euphrates river is mainly controlled by Kurdish YPG forces. The YPG are allied with the U.S. but Ankara has labeled as terrorists because of links to Kurdish militants in Turkey.

After intensive negotiations, Turkey and the United States have also set up a joint operation center. There is disagreement over the zone’s depth and over the command structure of the forces to operate there.

The Arab ethnicity of 1 million refugees will create a natural belt. It would separate the Syrian Kurds from the Turkish Kurds living across the borders.

Our geography is an advantage, but we are at a disadvantage in terms of migration and terror. If U.S. forces can patrol in the east of Euphrates with our forces and can enter with their own troops, and if there are the (Turkish) observation points in Idlib (in northwest Syria), this is all due to the steps taken by Turkey.

With U.S. backing over the last four years, the Syrian Democratic Forces (SDF) alliance the YPG spearheads has taken control of much of northeastern Syria from Islamic State militants.

Many of the inhabitants of the predominately Arab area – including Tel Abyad, Ras al Ain and several Arab villages – had fled to Turkey fearing reprisals by the YPG on charges they had links to Islamic State.

It is to the YPG advantage to accuse Arabs of Islamic State links to ethnic cleanse the Kurdish region.

Loading...
Newer Post
Israel Strikes Iranian Assets Half the Distance to Iran
Older Post
As If Syria No Longer Exists, Or Exists for a Sinister Purpose