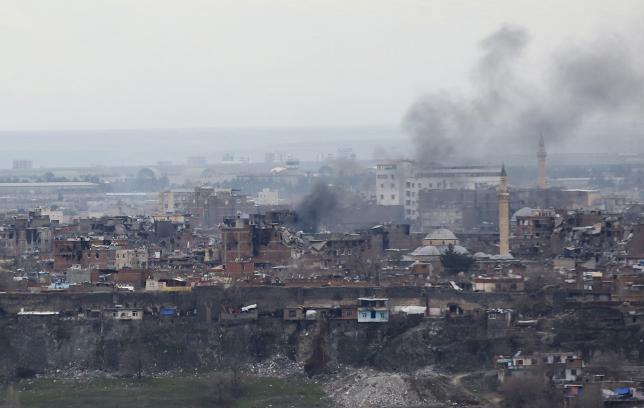 Turkey Is Itching to Intervene in Syria

February 16, 2016 1:32 pm 0
In Syria, militias armed by the Pentagon fight those armed by the CIA
Video Shows Bomb-Carrying Condom Balloons in Syria
The Syrian Curse

Turkey is asking allies including the United States to take part in a joint ground operation in Syria, as a Moscow-backed government advance nears its borders, raising the possibility of direct confrontation between the NATO member and Russia. Turkey is itching to intervene in Syria.

A large-scale joint ground operation is still unlikely: Washington has ruled out a major offensive. But the request shows how swiftly a Russian-backed advance in recent weeks has transformed a conflict that has drawn in most regional and global powers.

Syrian government forces made fresh advances on Tuesday, as did Kurdish militia, both at the expense of rebels whose positions have been collapsing in recent weeks in the face of the Russian-backed onslaught.

The offensive, supported by Iranian-backed Shi’ite militias as well as Russian air strikes, has brought the Syrian army to within 25 km (15 miles) of Turkey’s frontier, while Kurdish fighters, regarded by Turkey as hostile insurgents, have extended their presence along the border.

The advances have increased the risk of a military confrontation between Russia and Turkey. Turkish artillery returned fire into Syria for a fourth straight day on Tuesday, the defense minister said, targeting the Kurdish YPG militia which Ankara says is being backed by Moscow.

“Turkey is not going to have a unilateral ground operation … We are discussing this with allies.” Nonetheless, Turkey is itching to intervene in Syria as soon as possible.

Turkey on Monday accused Russia of an “obvious war crime” after missile attacks in northern Syria killed scores of people, and warned the YPG it would face the “harshest reaction” if it tried to capture a town near the Turkish border.

Russian air support for the Syrian government offensive has transformed the balance of power in the 5-year-old war in the past three weeks.

World powers meeting in Munich last week agreed to a pause in the fighting, but that is not set to begin until the end of this week and was not signed by the warring Syrian parties.

The U.N. Syria envoy, Staffan de Mistura, held talks with Syria’s foreign minister on Tuesday aimed at securing a cessation of hostilities and said Damascus had a duty to let the world body bring in humanitarian aid.

Turkey Is Itching to Intervene in Syria

Lavrov Seeks US Intelligence on Saudi Upcoming Operations in Syria
Assad’s U.N. Partners
We stood by while others carved up Syria
Putin Terror 435 Syria News 1210