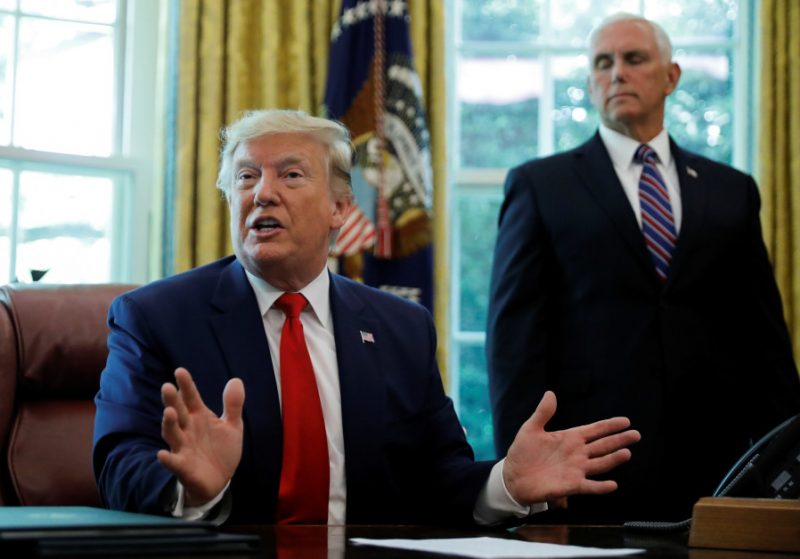 October 15, 2019 2:25 am 0
Assad Is Angry Over His Inability to Steal Syria’s Oil
As Turkish Troops Enter Syria, Death Toll Will Only Rise
Trump Keeps Half Pregnant Presence in Syria

President Donald Trump imposed sanctions on Turkey on Monday and demanded the NATO ally stop a military incursion in northeast Syria that is rapidly reshaping the battlefield of the world’s deadliest ongoing war.

The sanctions will rally the Turkish people around President Tayyip Erdogan.

Trump, who gave green light for Turkey’s assault, requested the ceasefire in a call with Erdogan. Earlier, Trump ordered U.S. forces away from the conflict area.

The United States of America simply is not going to tolerate Turkey’s invasion in Syria any further. We are calling on Turkey to stand down, end the violence and come to the negotiating table.

TOO LITTLE, TOO LATE

The move was quickly criticized as too little, too late by the top Democrat in Congress.

His announcement of a package of sanctions against Turkey falls very short of reversing that humanitarian disaster.

Ankara regards the YPG as a terrorist group aligned with Kurdish insurgents in Turkey.

Russia-backed Syrian forces on Monday took rapid advantage of the abrupt U.S. retreat in Syria to deploy deep inside territory held by U.S.-backed Kurdish forces south of the Turkish frontier. Washington had announced plans for a full withdrawal from northern Syria less than 24 hours earlier.

Washington’s Kurdish former allies said they invited in the government troops as an emergency step to help fend off the Turkish assault. The Kurds call Trump’s Syria exit a betrayal.