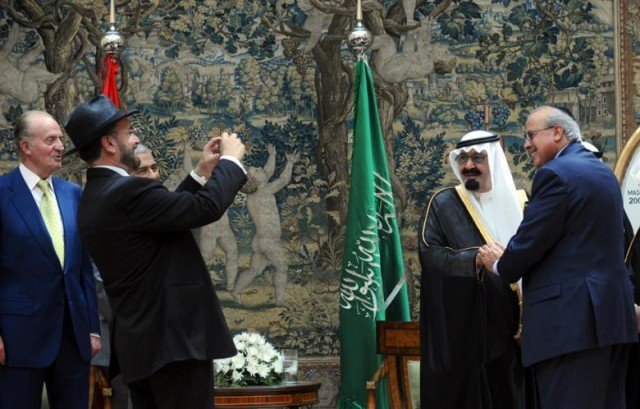 May 12, 2015 12:48 pm 0
Blame Qatari Incompetency on.. Israel
If Israel Makes Arabs Mad at the U.S., Our Partnership With Iran Will Make Them Even Madder
Justice or Islamism?

It would not surprise us here, at RPS, if the Arab Gulf countries, Turkey, and Israel have signed a secret security pact or at least have come to a confidential understanding when it comes to Arab support of Islamists fighting Iran and Hezbollah in Syria.

Such pact might have happened also in the past as well when Israel deemed it necessary to attack Iranian nuclear installations. After all, for any successful military attack, the IDF needs Saudi airspace, refueling stations, and access to Saudi air bases for their mission to succeed should it be necessary.

Something Israel almost embarked upon until Obama threatened to shoot down any Israeli Air Force fighter jets heading towards Iran.

An article in the Telegraph of London entitled “Syria crisis: Turkey and Saudi Arabia shock Western countries by supporting anti-Assad jihadists” should give us pause as to the dynamics at play here. On one hand the U.S. and Europe, to a certain extent, are promoting isolationism (No interference in Syria to avoid Iranian anger) and on the other hand, Western countries are shocked to see someone else interfere with a strategy that opposes their mindset.

Isolationists cannot be choosers too.

What matters here is not the West objecting. What matters is the lack of objection by Israel. One would think Israel would raise hell against Saudi Arabia and Turkey for their support of the Islamists. Instead, there is almost a complete silence. One that we are accustomed to hearing when tacit understandings and secret agreements are in place.

The media has been talking up the new Jaish al-Fateh (Army of Conquest), an amalgamation of many Islamists fighting Assad and the support this new united army has been getting from both Saudi Arabia and Turkey. But what has been missing in their analysis is the possibility this is a trilateral secret pact or understanding to include Israel. Of course, this is pure speculation on RPS part.

There are two reasons why Israel would keep its silence about Jaish al-Fateh.

One deals with the fact the Israeli Government believes Iran is far more lethal than ISIS or AQ combined, which it considers to be rag tag fighters dependent on outside help to flourish. Neither ISIS, nor AQ have a seat at the U.N. like Israel and Syria do, which makes them easy military targets.

The second reason is because Israel has secured or at least increased the chances of a certain outcome in Syria or exit strategy that would benefit the Jewish State more than the status quo of Assad and Iran combined. Compare Israeli media responses to Jaish al-Fateh as to its thunderous response to Obama’s US-Iran deal to gauge its DEFCON status.

In other words, Israel may have gotten secret guarantees from Saudi Arabia and Turkey that when Assad is deposed and his regime dismantled, the Islamists most dangerous to Israeli security would be starved, and even chased out of Syria by the same patrons who helped them defeat Assad.

Iran is uniting Arabs, Turks, and Israelis into a possible trilateral secret pact like no other country even if the leadership of either do not see eye-to-eye on many other important strategic issues. Countries in the region fearing Iranian terror have come to understand that unless they unite, Iran would not be defeated; ergo, the speculative trilateral secret pact.

Is this why the Obama Administration is defending Assad indirectly now? Could this trilateral secret pact be derailing Obama’s own secret plans for Israel?

There is a good reason for Israeli silence on the matter of Saudi and Turkish support for the Islamists and their new unity. Israel may believe it is in its best interests after possibly receiving certain future guarantees.

How Obama’s Iran Deal Pushed Best Ally Israel Towards Russia
Obama threatened to fire on Israeli jets attacking Iran
Global March to Jerusalem? How About One to the Ruins of Homs Ayatollah Khameini?
Things That Matter 382