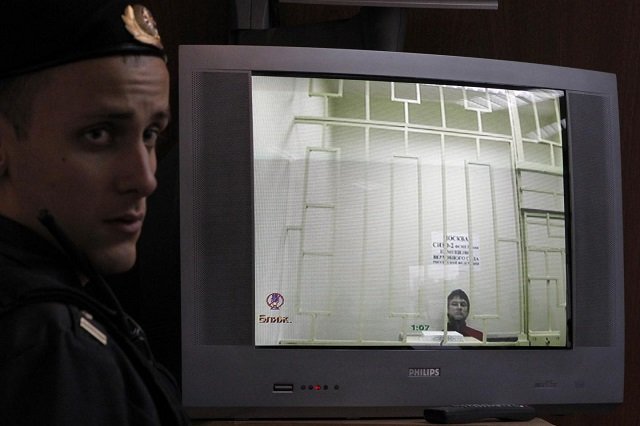 Source: Newsweek – by Makim Shemetov (Torture by Police is the New Reality in Russia)

Sergei Pestov was a passionate drummer. In the mid-1970s, he was a founding member of the Soviet rock group Zhar-Ptitsa (Fire-Bird), thrilling fans of the country’s nascent underground music scene with his frantic solos. Although, like many Soviet and Russian musicians, he never made a living from performing, he continued to pound the drums whenever he got the chance. On September 4, 2015, Pestov, then 57, had just put down his sticks after a jam session in a converted garage in Dubna, a small town near Moscow, when police officers burst in.

The exact details of what happened next are the subject of an ongoing legal dispute between Russian law enforcement officials and lawyers representing Pestov’s family. But what is not disputed is this: The following morning, Pestov’s wife, Irina, discovered his bruised and lifeless body in a local hospital, a victim of what human rights activists allege is the widespread use of torture by Russian police.

“Police began hitting him soon after they entered the garage,” Yekaterina Shcherbina, one of the musicians in the garage that evening, tells Newsweek. “One of the officers punched him on the back of the head, and blood immediately began to pour from his nose.” The officers did not present a search warrant, offered no explanation for their presence and at least one of them “smelled of alcohol,” Shcherbina says. Another witness, speaking on condition of anonymity to Russian opposition media, says Pestov cried out, “What are you doing? I’m not resisting arrest. You are killing me!”

Pestov’s hands were bound with his own belt, and he was driven to a nearby police station for questioning, where police say he admitted to dealing drugs for over a decade. (According to law enforcement documents seen by Newsweek, a search of the garage turned up some 4 ounces of marijuana, as well as traces of amphetamines.) Under Russia’s no-tolerance drug laws, this would have been enough to send him to a prison camp for up to 10 years.

Yet despite the seriousness of the charges, officers say they released the musician from the police station at around 4 a.m. the next morning, after “coming to an agreement” with him that he would return in a few hours. If he was indeed released, it is unclear where he went: He did not go home, and he did not contact friends or family. Police say Pestov kept his side of this unlikely bargain and returned to the station at around 10 a.m., then immediately began to complain of feeling unwell, slipped into a deep coma and died on the way to a hospital.

“For some unknown reason, the police supposedly decided to release in the middle of the night a person they had just arrested in possession of a large amount of drugs, instead of locking him up,” says Dmitry Piskunov, a human rights lawyer with the nongovernmental Committee for Prevention of Torture who is representing the Pestov family.

It is a version of events that has been challenged by Pestov’s widow, who accuses police officers of holding her husband overnight and beating him to death. Police say they did not strike Pestov at any point. Although the official medical report states that “blunt objects” were the cause of no fewer than 10 bruises and lesions on Pestov’s body, it also concludes that his death was the result of sudden heart failure. Russia’s Investigative Committee, an FBI-style law enforcement agency that answers only to President Vladimir Putin, calls allegations that police killed Pestov “unfounded” and refuses to bring criminal charges against the arresting officers.

No one knows how many people die every year in Russian police custody—that is, before reaching trial or often before even being charged—because the authorities do not publish statistics. Last year, after becoming alarmed by almost daily reports of detainee deaths, opposition journalist Maria Berezina created a website to document fatalities. “People should understand that if they are taken to a police station, there is a chance they will not come out alive,” she recently told Spektr, an opposition-friendly website.

Basing her research on Interior Ministry reports and news items, Berezina recorded 197 confirmed deaths in police custody for 2015. However, she says police cover-ups mean this is only a fraction of the number of deaths. It is an opinion shared by Pavel Chikov, a human rights lawyer who has been dealing with police torture cases since 2002. “Violence is the norm among Russian police,” he says. “But we only see the tip of the iceberg.” The Interior Ministry did not respond to a request for comment by Newsweek.

Of the deaths listed by Berezina, 104 resulted from what authorities vaguely call “a sudden deterioration in health conditions.” There were also 62 reported suicides. “Police can beat a person to death and then just hang the body up and make it look like he or she committed suicide,” says Sergei Babinets, another lawyer with the Committee for Prevention of Torture, in an interview at the organization’s Moscow office. “This will remain the official cause of death, unless there are relatives who are prepared to challenge the authorities when they are handed a battered body.” Babinets blames a lack of specialized training, low recruitment standards and a pressure to meet monthly “arrest quotas” for a culture of violence among Russia’s police force.

Opponents of Putin’s long rule have also complained of violence in police custody. In March 2013, Leonid Razvozzhayev, a leftist political activist, told a Moscow court he had been tortured by investigators who wanted him to incriminate opposition figures in an alleged foreign-funded coup plot. Gaunt and drawn, his hair starting to gray, Razvozzhayev compared his experiences in the prisons and holding cells of eastern Siberia to the infamous U.S. detention facilities at Abu Ghraib and Guantánamo Bay.

Daniil Konstantinov is another Kremlin foe who says he was tortured by Russian law enforcement. A nationalist politician with ties to the pro-democracy opposition, he alleges that in December 2013 he was assaulted in a court-holding cell by security officers with electroshock devices—reportedly known in police slang as “a phone call to Putin”—and left handcuffed to a bench in an agonizing position for around five hours. “These officers are part of a so-called rapid reaction squad who seem to have been selected for their sadistic tendencies,” he tells Newsweek. Konstantinov fled Russia in 2014 and now lives in Lithuania.

In both cases, the Investigative Committee refused to bring criminal charges against authorities. Pestov’s death gained media attention because of his past as a member of a Soviet rock group, but his case was a rare exception. The vast majority of fatalities or allegations of torture in police custody in Russia are met with silence or, at best, a resigned shrug. Unlike in the United States and Europe, reports of the mistreatment of detainees by police officers rarely trigger public outrage. And outside the volatile, mainly Muslim North Caucasus region, where Russian security forces have been accused of widespread torture of suspected Islamist fighters, there are no mass protests against police brutality.

“We are well aware that torture doesn’t only take place in Russia,” says Babinets, the human rights lawyer. “Unfortunately in Russia torture has become an everyday thing. People are no longer surprised by news that someone was beaten in police custody. It’s on the level of online pictures of cats and the weather forecast. It takes something really shocking to arouse interest. People think, If the police took you in, this means you are guilty of something, and so they can beat you.”

Human rights lawyers have scored some victories, however. In 2014, in the most high-profile case of police torture in modern Russian history, three police officers in Kazan, a city in central Russia, were jailed for 10 to 15 years after being found guilty of murdering Sergei Nazarov by sodomizing him with a glass bottle. He had been detained on charges of petty hooliganism.

Those convictions, and others like them, were the result of selfless work by Russian human rights lawyers and activists, but the Kremlin is clamping down on them. Earlier this year, Agora, a leading Russian human rights group, was disbanded after it was judged to have violated a recently introduced law governing the work of nongovernmental organizations by engaging in “political activities.”

The Committee for Prevention of Torture is also coming under mounting pressure. In December, its offices in Chechnya were torched by unidentified attackers, and in March, journalists and activists on a press tour that it organized in the North Caucasus region were beaten by masked men. The committee has also been targeted under the same law used to close down Agora. Yet its lawyers insist they will continue their work, even if the organization is forced to disband.

“If the worst comes to the worst, we will just take on cases as individual lawyers,” Babinets says. “The torturing isn’t going to stop.”

If Russia Invaded Syria, Why Not Turkey?
The Naked Foreign Policy of Barack Obama
Why is Russia not screaming bloody hell against the $500m?
Putin Terror 436 Syria News 1213