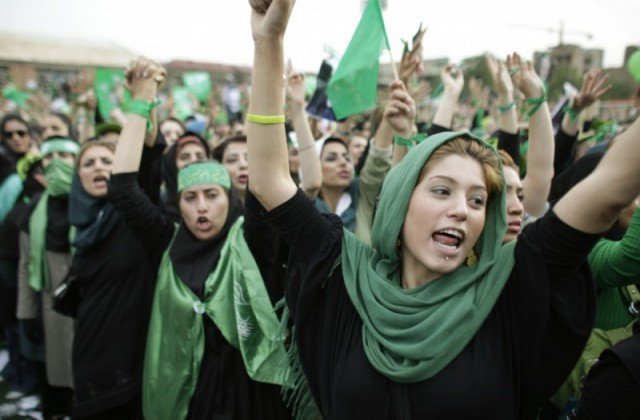 Time for Iranians to rise

The Wall Street Journal?reported?on the IS terrorists meaningful gains while battling the Assad forces. Apparently, they gained access to the Baath Party HQ in Hasakah, managed to?capture?a military base in Raqqa, and kill two Brigadier Generals in Assad?s army, one of whom stood guard over the Division 17 base warehousing a large cache of weapons and ammunition.

Starting Wednesday of this week, the Islamic Caliphate opened three different fronts in Syria against the Assad positions. The civil war is beginning to turn on Assad in a vicious way.

The battle against the Syrian regime on three fronts is Assad?s first experience confronting the Jihadists he freed from his own jails (as documented by Newsweek). How Assad has performed, so far, should be of concern to the Alawite and Christian communities eager to find a peaceful resolution to the Syrian civil war. The mother of all military tests is yet to come for the regime forces and one would assume Assad never imagined he would fall victim to his own proxy war.

One could say Assad is beginning to taste his own blood.

My hope the Assad forces and the Jihadists kill each other fighting in order to curb the terror of both groups, which may finally convince Syrians that as long as Assad is in power, there will be no easy way out of the vicious circle of violence. Assad created the Jihadists and Assad is facing his own music today. Did he really think there would be no consequences or repercussions to gassing women and children or barrel bombing civilians so savagely?

Of late, our own US intelligence is beginning to sound the alarm over the spike of Jihadists in the new Islamic Caliphate al-Baghdadi founded. Speaking at the Aspen Forum for Security, Matthew Olsen of the National Counterterrorism Center estimate the number of Jihadists to swell to 12,000 since January of which 1,000 originated from the EU and 100 from the US. If you consider that each and everyone one of these Jihadists is a potential suicide bomber, this is a formidable force by any standards.

However, we should point, again, the finger of blame at Assad for Olsen?s facts.

If you recall, back in January of 2013, The Telegraph published information, backed by US intelligence, to the effect Assad was boosting AQ, ISIS, and Jabhat al-Nusra by purchasing oil from fields they occupied. In doing so, Assad hoped the funds would be used to battle the moderate elements in the Free Syrian Army he deemed to be much more dangerous as an alternative to his rule. This trick worked for a while, but no more. Do thank Assad for his stupidity.

The ferocious combats we learned about the last few days are demonstrating that when you play with fire, you need to be prepared to burn your extremities at any point in time. Assad is beginning to smoke heavily.

If one considers how little the IRGC has been able to interrupt the Jihadists in Syria or Iraq, one has to assume that the terror organization is stretched too thin. Maybe, then, the time has come for the Iranian Green Movement to stir the pot at home. Maybe the Iranian regime is much weaker than our US intelligence services are able to estimate. Maybe the Mullahs are choking on their own Gaza, Syria, and Iraq big bites.

Assad implicated Iran in Syria and indirectly in Iraq, and the Mullahs implicated themselves in a new proxy war in Gaza. No country can plug three fronts in three different regions, even if proxies are doing much of the dirty work.

My message to the Iranian people is to rise the way the Syrian people did. Otherwise, considering how most Americans feel about isolationism, it will be many, many years before the US steps up to help any people free themselves from the shackles of tyranny.

President Obama is not about to raise his eyebrows let alone his concerns if the Iranian people commit themselves to a new revolution. Furthermore, I would imagine the Europeans would have no choice but to support such a revolution covertly given they understand where Obama stands on keeping his nose clean from any conflict, especially if they witness real leadership on the part of the Green Movement.

It is high noon for the Iranian people to clasp the reins of their destiny. The world has witnessed how courageous they could be already. The Iranians were the first to stand-up to tyranny in the region in June of 2009, long before the Arab Spring started.

The region needs them again today at a time their Mullahs are showing fatigue and strain.

Time for Iranians to rise.