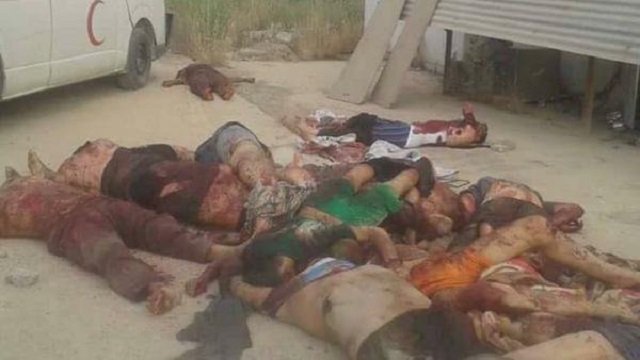 November 14, 2015 9:47 am 0
Hariri calls on Hezbollah to withdraw from Syria
Iran must withdraw occupying forces from Syria
Time for Israel to Attack Hezbollah?

al-Nusra Front identified the detainees as Mohammed Mehdi Shoaib and Moussa Qurani, both from southern Lebanon, and Hassan Nazih Taha from al-Hermel from the Bekaa.

A number of other Hezbollah party members were killed in combat in the area, it revealed. This announcement comes on the heels of a Western laissez-faire attitude towards the atrocities the Assad regime is committing against Sunni civilians, which were the main reason behind the Sunni terror acts in Paris overnight.

Hezbollah terrorists have been combating alongside the Syrian regime against an uprising that broke out in the country 2011 the result of extreme oppression and tyranny by the psychopath Baschar al-Assad.

What started as a peaceful uprising by the Syrian people turned violent when the Assad regime adopted extreme force to stifle the revolt.

Hezbollah acknowledged its terrorist fighters were involved in the Syrian war in 2012. But while the West confronted ISIS with the use of force, it has totally ignored the atrocities Iran is committing in Syria through its proxies like Hezbollah or directly through the IRGC.

This led to the perception among many angry Arab Sunnis that the West, and in particular Barack Hussein Obama, wants Iran to dominate the region and spread its wings of terror across Sunni Arab lands and peoples.