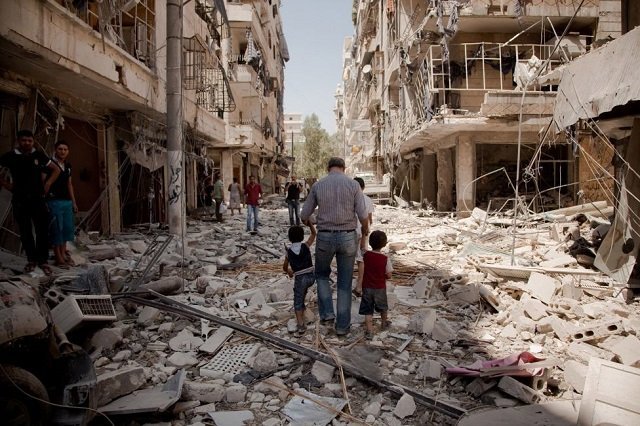 The West’s Catastrophic Defeat in the Middle East

Bashar al-Assad is still in power in Damascus and al-Qaeda’s black flag was recently waving above Fallujah and Ramadi in Iraq. Not only has the process of fragmentation in Syria now spilled over to Iraq, but these two realities also share a common cause that could be summarized into a simple phrase: the failure of the West.

The capture, even though temporary, of the cities of Fallujah and Ramadi by Sunni militias claiming links to al-Qaeda, is a strong and even humiliating symbol of the failure of the policies the United States carried out in Iraq. A little more than a decade after the overthrow of Saddam Hussein’s regime – and after hundreds of thousands of deaths on the Iraqi side and more than 5,000 on the American side – we can only lament a sad conclusion: All that for this!

In Syria, the same admission of failure is emerging. Assad and his loyal allies – Russia and Iran – have actually emerged stronger from their confrontation with the West. Civilian massacres, including with chemical weapons, did not change anything. The regime is holding tight, despite losing control of important parts of its territory, thanks to its allies’ support and, most importantly, the weakness of its opponents and those who support them.

In reality, from the Middle East to Africa, the entire idea of outside intervention is being challenged in a widely post-American region. How and when can one intervene appropriately? At which point does not intervening become, to quote the French diplomat Talleyrand following the assassination of the Duke of Enghien in 1804, “worse than a crime, a mistake?”

When is intervention necessary? “Humanitarian emergency” is a very elastic concept. Is the fate of Syrian civilians less tragic than that of Libyans? Why intervene in Somalia in 1992 and not inSudan? The decision to intervene reveals, in part, selective emotions that can also correspond to certain sensitivities or, in a more mundane way, to certain best interests of the moment.

Intervention becomes more probable when it follows the success of some other action; or, on the contrary, a decision to abstain that led to massacre and remorse. The tragedy of the African Great Lakes in 1994 – not to mention the Srebrenica massacre in Bosnia in 1995 – certainly contributed to the West’s decision to intervene in Kosovo in 1999. In reality, the intervention of a given country at a given time is typically driven by multiple factors: the existence of an interventionist culture, a sense of urgency, a minimum of empathy towards the country or the cause justifying the intervention, and, of course, the existence of resources that are considered, rightly or wrongly, sufficient and well-adapted.

But more than “when,” it is a question of “how” – the two being often inextricably linked. Intervening alone can have many benefits, including the rapidity of execution, which often leads to efficient operations. The French army was not unhappy to end up alone in Mali. On the other hand, although it can slow down the operations schedule, forming a coalition gives the intervention more legitimacy, and helps share the costs and risks between the various operators.

It is likely that France, which after the Mali operation has engaged in the Central African Republic in a much more uncertain conflict, would now prefer having some support – for reasons related to costs and resources as well as geopolitics. No one wants to share success, but no one wants to end up alone in a potential deadlock either.

America’s failure – in Iraq and in Syria – should be considered the West’s failure as a whole, even though Washington’s share of responsibility is unquestionably the largest.

Failure is generally the result of the interaction between three main factors that are almost always the same: arrogance, ignorance and indifference. Arrogance leads to overestimating one’s capacities and to underestimating the enemy’s capacity for resistance. It is all too easy to win the war but lose the peace.

“Democracy in Baghdad will lead to peace in Jerusalem,” a slogan of the American neo-conservatives, took a disastrous turn in Iraq.

Arrogance is almost always the result of ignorance. What do we know about the cultures and histories of the populations we want to save from chaos and dictators? Yesterday’s colonial officers, who drew lines in the sand to create the borders of the new empires and states, turned their nose up at the local religious and tribal complexities. Today, the situation may be worse still. Sheer ignorance prevails.

Finally, there is the sin of indifference. Of course, the ISIL (Islamic State in Iraq and the Levant) is worrying Washington, thus leading to closer ties between the U.S. and Iran regarding Iraq. But the starting point was, in Syria, the U.S.’s refusal to take its responsibilities.

The result is clear: a double defeat, strategic and ethical, for the West. Washington has brought a resounding diplomatic victory to Moscow and has allowed Bashar al-Assad to stay in power.

The West’s Catastrophic Defeat in the Middle East

While Syrians are Massacred, the Arab League Waves a Finger
On The Line: Iran And Syria’s Proxy War
Shielding the Region from NATO
Middle East News 220 Syrian Revolution 1335