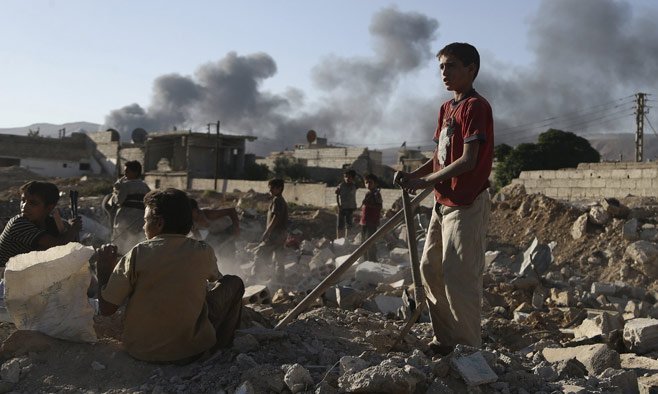 September 23, 2015 9:10 am 0
Putin Is Driving Syrian Refugees Towards Europe
What Did King Salman and Putin Agree Upon on Syria?
Is Obama Providing Putin with Intelligence on Syrian Opposition Positions?

All indications are that the West has outsourced Syria to Vladimir Putin. Besides the fact that our Pentagon is deconflicting over the Syrian skies to avoid the “unintended incidents” Russian Foreign Minister Sergey Lavrov warned America about, and our Secretary John Kerry finding excuses to justify the Russian Air Force build-up in Syria, there is also a discomforting silence emanating from Israel.

It seems everyone is on the same page for defeating Islamism in Syria at the expense of subjecting the Syrian people to the Assad tyranny. Instead of a civil war that might yield the marginalized moderate forces, it seems there is an international nod that Assad’s survival has become the West survival in its war against fanatic Sunni Islam now fully entrenched in Syria.

Vladimir Putin and Benjamin Netanyahu have agreed to avoid any clashes in Syria. For the experienced analyst, it means Israel has been provided assurances for its own security even though Baschar al-Assad, a nemesis, and a partner to Iran, will be protected by Putin.

The consequences of events make no sense because if Israel has acquiesced to Putin’s role in Syria, which keeps Assad in play, why then is Israel opposing the Obama Iran Deal, which enhances Assad’s role in empowering Iranian terror Israel is its main target.

Unless Israel has some kind of short-term assurances from Iran, now fully in control of the Assad regime, that it intends to target Assad’s enemies in Syria only. Barring this improbable thought, it is also possible that Israel has no choice in the matter since Obama has decided he wants to play more golf by letting Putin do his work in Syria. Securing their borders is the best next thing for the Israelis.

When the West outsources Syria to Putin, it throws every basic political assumption into a tailspin with regard to who is who’s enemy outside the scope of extreme Sunni Muslims, represented by ISIS and AQ, everyone opposes.

When the West outsources Syria to Putin, the price for the Sunni Arabs will be steeper than they all think. How will they respond?

To Sunni Arabs, represented by the Gulf States, fighting against the Assad terror in Syria diminishes Iran’s capabilities. As long as the battle rages on, Iran has little appetite to open a new front, besides its failed on in Yemen in support of the Houthis, to weaken the Arab Sunnis who are really Iran’s main target more so than Israel.

How will Saudi Arabia respond to this outsourcing remains unclear. What is clear is that the Kingdom’s position against the Assad rule is in fact a position of self-preservation. How far will Saudi Arabia go to preserve its future and integrity will depend on how al-Sauds respond to Putin’s challenge in Syria.